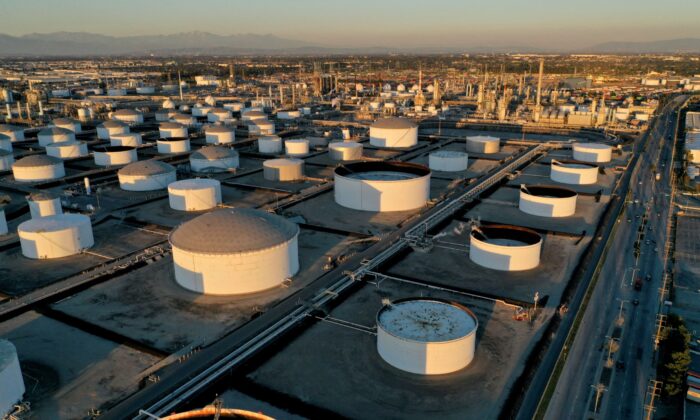 LONDON—Oil prices slipped in volatile trading on Tuesday as investors weighed demand concerns against tight global supplies after Libya halted some exports and as factories in Shanghai prepared to reopen following a COVID-19 shutdown.

Prices came under pressure with the dollar trading at a fresh two-year high. A firmer greenback makes commodities priced in dollars more expensive for holders of other currencies, which can dampen demand.

Concerns over demand growth were also in focus ahead of the release of the IMF’s World Economic Outlook on Tuesday.

“Expectations are for lower growth forecasts due to the double whammy of the Ukrainian crisis and the ongoing coronavirus pandemic,” PVM analyst Stephen Brennock said in a note.

China’s economy slowed in March, worsening an outlook already weakened by COVID-19 curbs and the Ukraine war and adding to demand concerns.

However, fuel demand in China, the world’s largest oil importer, could begin to pick up as manufacturing plants prepare to reopen in Shanghai.

The price decline on Tuesday followed a rise of more than 1 percent on Monday, when oil prices hit their highest since March 28 on Libyan oil supply disruptions.

The country’s National Oil Corp. (NOC) warned on Monday of “a painful wave of closures” and declared force majeure on some output and exports as forces in the east expanded their blockade of the sector over a political standoff.