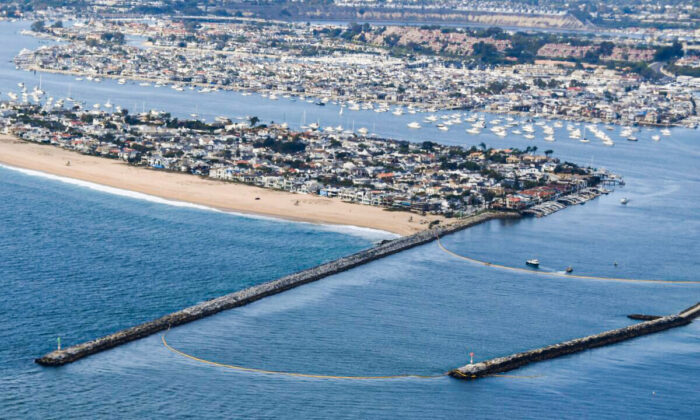 A federal grand jury has accused oil company Amplify Energy Corp. and two of its subsidiaries with negligently discharging oil during a pipeline break in California in early October.

If found guilty, the companies face a maximum of five years of probation as well as potentially millions of dollars in fines.

Amplify has disputed the allegations, saying it had investigated the pipeline once alerted to a leak, but that crew were unaware that the leak detection system was malfunctioning.

In a press release, Department of Justice (DOJ) prosecutors alleged that the companies had acted negligently in at least six ways, including failing to properly respond to eight separate alarms from an automated leak detection system over the span of more than 13 hours on Oct. 1–2 and improperly restarting the pipeline that had been shut down five times following the leak alarms, which prosecutors said resulted in oil flowing through the damaged pipeline for more than three hours.

They also accused the company of continuing to pump oil through the pipeline for three additional hours on Oct. 1 into the early hours of the morning while a manual leak test was performed, despite the sixth and seventh alarms going off.

After the eighth alarm went off, the company continued to operate the pipeline for nearly one hour before dawn of Oct. 2 after a boat they contacted failed to see discharged oil in the middle of the night, prosecutors said.

The crew operating the pipeline were also “understaffed and fatigued,” and had not been sufficiently trained on the automated leak detection system, federal prosecutors say.

As a result, the DOJ said an estimated 25,000 gallons of crude oil was leaked from a crack in a 16-inch oil pipeline that the company operates approximately 4.7 miles west of Huntington Beach.

The Epoch Times has contacted a spokesperson at Amplify for comment.

The spill caused significant ecological damage, leaving birds and fish marred in petroleum, while many of them reportedly washed up on shores, from Huntington Beach to San Clemente and beyond.

At the time, the conservation advocacy group Oceana responded to the spill, calling for an end to offshore oil and gas drilling.

“This is the legacy of the fossil fuel age, in which the oil and gas industry pushed their product until we were addicted. We need to break that addiction by shifting to clean energy. It’s time for the age of oil and gas to be history. This is just the latest of many tragedies caused by the oil and gas industry. The reality of our reliance on oil and gas is on full display here,” Jacqueline Savitz, Oceana’s chief policy officer, said in a statement.

Following the leak, Amplify announced that its subsidiary Beta Offshore first observed and notified the U.S. Coast Guard of an oil sheen approximately four miles off the coast of Southern California on Oct. 2 and initiated its Oil Spill Prevention and Response Plan, sending its remotely operated vehicle to investigate and attempt to confirm the source of the release.

“As a precautionary measure, all of the company’s production and pipeline operations at the Beta Field have been shut down,” the company said at the time, noting that it was working with the Coast Guard and California Department of Fish and Wildlife’s Office of Spill Prevention and Response.

In a follow-up statement shortly after, Amplify said it was still working with officials to remedy the spill and was “committed to safely operating in a way that ensures the protection of the environment and the surrounding communities—communities where many of our employees live and raise their families.”

“This commitment will continue to guide our response to this incident, and we will work closely and cooperate with all regulatory and governmental bodies,” they added.