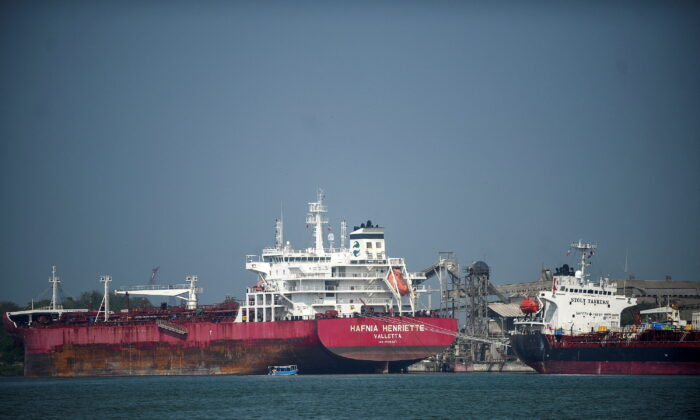 Oil tankers are docked at the port of Tuxpan, in Veracruz state, Mexico, on April 22, 2020. (Oscar Martinez/Reuters)
Gold and Commodities

U.S. oil companies are working around a century-old shipping law to supply fuel to the U.S. East Coast, according to data from Refinitiv and oil trading sources, as high demand for gasoline and global disruptions in fuel markets sent prices higher.

Traders are increasingly sending unfinished gasoline components from the Gulf Coast to Buckeye Partners LP’s terminal in the Bahamas, also known as Borco, where they are blended into finished gasoline to be sent to the U.S. East Coast. The uncommon trade is a sign of heavy demand for products up and down the coast, home of some of the nation’s largest consumer markets.

The trade represents a legal workaround to the Jones Act, which requires goods moved between U.S. ports to be carried by ships built domestically and staffed by U.S. crew.

There is a limited quantity of those vessels, which raises the cost of those shipments.

Since March, at least eight vessels have transported gasoline components from the Gulf Coast to the Borco terminal in the Bahamas, and then delivered finished gasoline from there to ports along the Atlantic, according to shipping data.

The majority of the vessels were chartered by BP Plc. BP declined to comment.

Normally, Gulf Coast sellers make bigger profits either by exporting products, or by sending gasoline or diesel to the East Coast by way of the Houston-to-New Jersey Colonial Pipeline, which carries roughly 2.5 million barrels per day of gasoline and other fuels.

That line is jammed right now as U.S. East Coast refineries struggle to meet demand. Those refiners are running at more than 98 percent capacity, according to the U.S. Energy Information Administration.

Shippers submit requests to Colonial to move refined products on Colonial, but right now those requests exceed the line’s overall capacity. Space on the line is more expensive than in years, traders said, making it suddenly profitable to transport goods with the Bahamas stop.

This trade does not run afoul of the Jones Act, but it was uncommon before Russia’s invasion of Ukraine, and did not occur in 2021, according to available shipping data.

In 2021, the United States exported 146,000 barrels of gasoline components in total to the Bahamas, according to the EIA. In May 2022 alone, the most recent data available, that figure was 498,000 barrels.

In March, the Agean Star and Gulf Rastaq loaded fuel components in Houston, discharged at Borco and later supplied finished gasoline to Savannah, Georgia, and Jacksonville, Florida, according to shipping data.

The Nave Luminocity and Navig8 Success vessels loaded gasoline components in the Gulf, discharged at Borco and then transported finished gasoline to New Jersey and New York, shipping data showed. Several more ships made similar voyages through the summer.