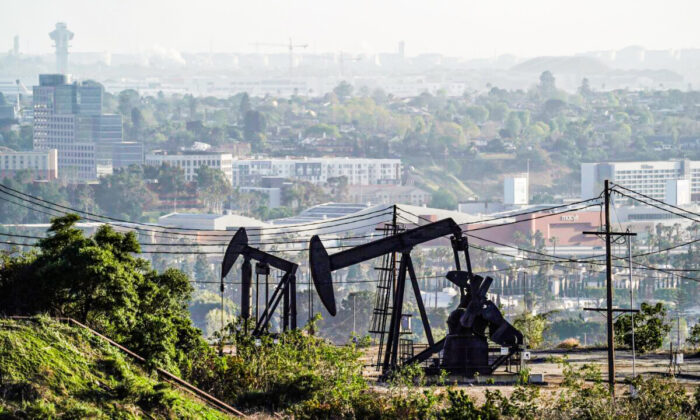 Active pumpjacks from oil wells are pictured at the Inglewood Oil Field, the largest urban oil field in the United States, from the Baldwin Hills Scenic, Overlook in Culver City, Calif., on March 10, 2022. (Bing Guan/Reuters)
Gold and Commodities

Oil Climbs as Tight Supply Moves Back Into Focus

LONDON—Oil rose $1 a barrel on Tuesday as tight supply moved back into focus as a result of Saudi Arabia floating the idea of OPEC+ output cuts to support prices and the prospect of a drop in U.S. crude inventories.

The Saudi energy minister said OPEC+ had the means to deal with challenges including cutting production, state news agency SPA said on Monday, citing comments Abdulaziz bin Salman made to Bloomberg in an interview.

“Whether cutting OPEC or OPEC+ output after September is justified is debatable,” said Tamas Varga of oil broker PVM. “Despite the recent inflation-induced weakness, the oil market seemed to have found a bottom lately.”

Oil has soared in 2022, coming close in March to an all-time high of $147 after Russia’s invasion of Ukraine exacerbated supply concerns. Concern about a global recession, rising inflation, and weaker demand has since weighed on prices.

Also in focus is the prospect of a nuclear deal between Iran and world powers that would allow Iran to boost oil exports.

While the price of Brent futures has fallen sharply from this year’s high, the market structure and price differentials in the physical oil market still point to supply tightness.

In the comments reported on Monday, the Saudi minister said the paper and physical oil markets had become “disconnected.”

Underlining tight supply, the latest weekly reports of U.S. inventories are expected to show a decline of 1.5 million barrels in crude stocks. The first of this week’s two reports is out at 2030 GMT from the American Petroleum Institute.