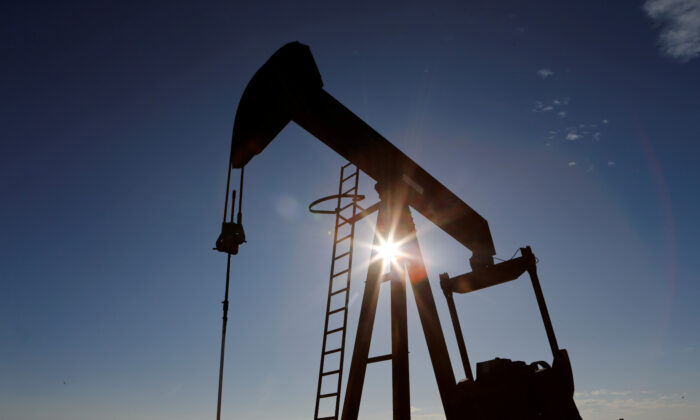 The sun shines through a crude oil pump jack in the Permian Basin in Loving County, Texas, on Nov. 22, 2019. (Angus Mordant/Reuters)
Commodities

LONDON—Oil extended gains to seven-year highs above $90 a barrel on Thursday as the Ukraine crisis outweighed signs that the U.S. Federal Reserve will tighten monetary policy.

Crude prices had surged on Wednesday, with Brent climbing above $90 a barrel for the first time in seven years amid tensions between Russia and the West. Russia, the world’s second-largest oil producer, and the West have been at loggerheads over Ukraine, fanning fears of disruption of energy supplies to Europe.

Both contracts were lower in early trading after the U.S. Federal Reserve said on Wednesday that it is likely to raise interest rates in March and plans to end its bond purchases that month in its battle to tame inflation.

The U.S. dollar climbed after the announcement, making oil more expensive for buyers using other currencies.

“A more pronounced price slide is being prevented by the Ukraine crisis, as there are still concerns that Russian oil and gas deliveries could be hampered in the event of a military escalation,” Commerzbank said after the morning price dip.

Market attention is also turning to a Feb. 2 meeting of the Organization of the Petroleum Exporting Countries (OPEC) and allies led by Russia, a group known as OPEC+.

OPEC+ has raised its output target each month since August by 400,000 barrels per day (bpd) as it unwinds record production cuts made in 2020.

However, the group has faced capacity constraints that have prevented some members from producing at their quota levels.

Still, an increase in crude oil and gasoline inventories in the United States alleviated some of the concerns about supply.

Crude inventories rose by 2.4 million barrels last week, the Energy Information Administration (EIA) said on Wednesday. That compared with expectations of a decline of 728,000 barrels in a Reuters poll of analysts.

Gasoline stockpiles rose by 1.3 million barrels, the most since February 2021.