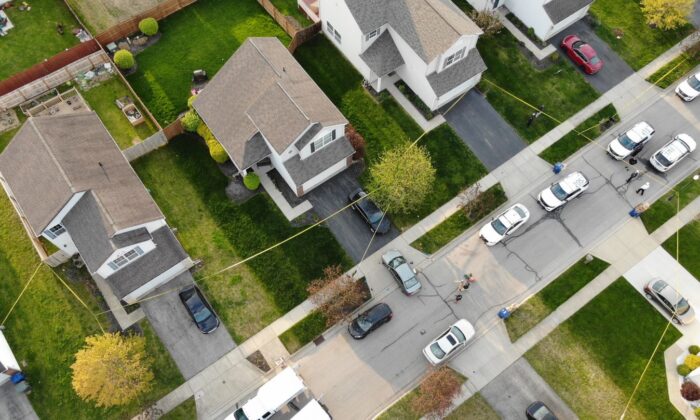 An aerial photograph shows the scene of the fatal shooting of a teenager in Columbus, Ohio on April 20, 2021. (Ohio BCI)
Crime and Incidents

An Ohio police officer was cleared in the fatal shooting of a teenager, authorities announced March 11.

Reardon, who arrived with other officers in response to a 911 call, fired as Bryant wielded a knife and tried to assault another young woman.

“Under Ohio law, the use of deadly force by a police officer is justified when there exists an immediate or imminent threat of death or serious bodily injury to the officer or another,” special prosecutors Tim Merkle and Gary Shroyer told news outlets in a statement announcing the grand jury decision.

The shooting took place outside the foster home where Bryant lived and Shai-onta Craig, the other young woman, had previously resided.

Craig told investigators she drove to the home after hearing from another woman who used to live there, who called her and reported that Bryant and a sibling were “acting crazy,” according to a summary of her interview, released by Ohio Attorney General Dave Yost along with other materials.

Craig said she and Bryant exchanged words inside the home—an argument said to be over keeping the house clean—and that when she returned, Bryant charged at her while holding a knife.

Craig, who was pregnant at the time, recalled an officer giving verbal commands to Bryant before the shots were fired.

Michelle Martin, a lawyer for Bryant’s family, said in a statement that the family was disappointed in the grand jury decision.

“Ma’Khia’s family has long wondered why this officer opted for lethal force even though there should have been other non-deadly options available to deal with this situation,” Martin said.

Reardon told investigators he felt forced to use his weapon after Bryant didn’t stop what she was doing.

“At the time I fired my weapon, I was in fear for the life of the female in pink,” he said. “The suspect had a knife drawn back in her right hand and was starting to swing it forward to stab the female in pink.”

Bryant didn’t have a history of physical aggression, Angela Moore, the foster parent, told investigators, but had gotten into an argument several weeks before the incident with her sibling Janiah Bryant, who had called police and said she wanted to leave and “would kill Ma’Khia if she had to stay,” according to a summary of the interview.

The U.S. Department of Justice is reviewing the practices of the Columbus Police Department after Columbus Mayor Andrew Ginther asked for a review of possible “deficiencies and racial disparities” shortly after the shooting.