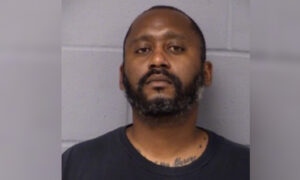 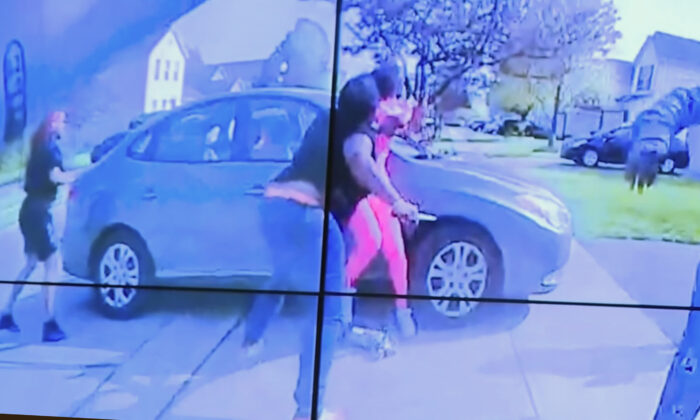 In an image from police bodycam video, a teenage girl, foreground, appears to wield a knife during an altercation before being shot by a police officer in Columbus, Ohio, on April 20, 2021. (Columbus Police Department via WSYX-TV via AP)
Crime and Incidents

The Columbus Division of Police in Ohio on Wednesday identified the officer who shot and killed a 16-year-old girl after she tried to stab two other females with a knife.

The officer is identified as Nicholas Reardon who has been with the division for one year. He has been taken off his Zone 2 Patrol assignment for the time being as the Ohio’s Bureau of Criminal Investigation (BCI) conducts a review of the incident, following a recent agreement with the city.

The Columbus police released initial footage of the shooting Tuesday night just hours after the incident. Ma’Khia Bryant, 16, was identified as the teenager who died after she was shot by Reardon.

The body cam video shows Bryant charging at one young woman with a knife. “Get down! Get down!” Reardon can be heard saying. He later opens fire after Bryant tries to stab another young woman dressed in pink. Bryant falls to the ground after four consecutive gunshots are heard in the video. She drops a black-handled blade on the sidewalk.

Bryant was taken to a hospital where she was pronounced dead around 5:20 p.m. local time. The incident of the shooting occurred around 4:45 p.m.

At the time of her death, Bryant was in foster care with Franklin County Children’s Services. Her grandmother, Debra Wilcox, told The Associated Press on Wednesday that what she saw on the video was “not how I know my Ma’Khia.”

“I don’t know what happened there unless she was fearful for her life,” Wilcox said.

Police had been dispatched just after 4:35 p.m. in response to a 911 call saying that females were trying to stab them and put their hands on them, according to Interim Police Chief Michael Woods. It remains unclear who called the police.

Investigators will determine whether police actions comply with state law that says “deadly force can be used to protect yourself or the protection of a third person,” Woods previously noted on Tuesday.

On Wednesday, he said that Columbus Police will assist the Ohio BCI in its investigation but will not interfere or provide input.

“[The Columbus Police’s] role is to provide them the information that they request and do so in a timely manner,” he said. “At the conclusion of their investigation, that investigation is sent to the Franklin County Prosecutor’s Office, where it will be presented to a Franklin County grand jury, and eventually the packet will come to the Columbus Division of Police, and we will review that incident for policy compliance or violations.”

Columbus Mayor Andrew Ginther posed questions to reporters on Wednesday that are yet to be answered.

“Bottom line, did Ma’Khia Bryant need to die yesterday? How did we get here? This is a failure on part of our community. Some are guilty but all of us are responsible,” Ginther said. “BCI will determine if the officer involved was wrong. And if he was, we will hold him accountable, as we have other officers who have committed wrongdoing criminally, or in violation of the policies and procedures of the Division of Police.

“Transparency, accountability, absolutely critical to our community during this time of crisis. We have a bigger societal question. How do we, as a city and a community, come together to ensure that our kids never feel the need to resort to violence as a means of solving disputes or in order to protect themselves? We remain committed to ensuring accountability in all violent interactions between police and our neighbors. The BCI investigation is the first step in unraveling what led to the tragic death of yet another child in our community.”

Ginther later noted that the city is “undertaking significant reform efforts,” from training to recruitment, to the types of officers assigned to patrol the streets, and what they are being equipped with. He said that reform is a top priority for the city in the near future.

“The fact that we had a 16-year-old girl armed and involved with physical violence with other folks in that community, that’s something for us to look in the mirror and to say, ‘What are we doing or not doing? How can we better serve young people who are facing one of the greatest spikes in violence in this city and in cities across America? What else can we be doing?'”

Woods was also asked to comment on questions reportedly asked on social media about why couldn’t the officer have shot the attacker in the leg or arms.

“We don’t train to shoot the leg, because that’s a small target. We are trained to shoot center mass, what is available to stop that threat,” he responded. “There was a threat going on, a deadly force threat that was going on, so the officer is trained to shoot center mass, the largest part of a body that is available to them. When you try to start shooting legs or arms, rounds miss, and then they continue on, and there are people behind that that could be in danger that are not committing anything. So we try and minimize any danger to anyone else if we have to use our firearm.”

He lamented over the situation. “It’s a tragedy. There’s no other way to say it. It’s a 16-year-old girl. I’m a father. Her family is grieving. Regardless of the circumstances associated with this, a 16-year-old girl lost her life yesterday. I sure as hell wish it hadn’t happened.”