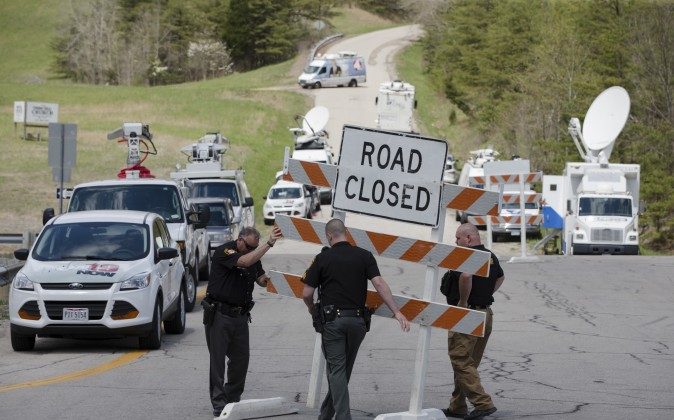 Authorities set up road blocks at the intersection of Union Hill Road and Route 32 at the perimeter of a crime scene, Friday, April 22, 2016, in Pike County, Ohio. (AP Photo/John Minchillo)
Crime and Incidents

The lead investigator on the case, DeWine, says the case is being put together “one piece at a time,” but says a motive still isn’t clear. No one has been arrested so far.

At the four crime scenes, police uncovered several marijuana growing operations and are unsure if they’re in connection with the slayings; also, evidence of cockfighting, single roosters kept in cages, were also located.

“This isn’t a plant in the window or six or seven plants out in the backyard in a garden or something. They were doing this to sell,” DeWine said during an interview with WLW Radio.

In one of the four homes where victims were shot, three children—3-years-old, 6-months-old, and 4-days-old—were found safe.

Union Hill Road, the street where of four gruesome crime scenes, remains closed by authorities; a small memorial can be seen at the street’s corner.

Anyone with information on the #PikeCounty homicides can call 1-855-BCI-OHIO to speak with authorities.