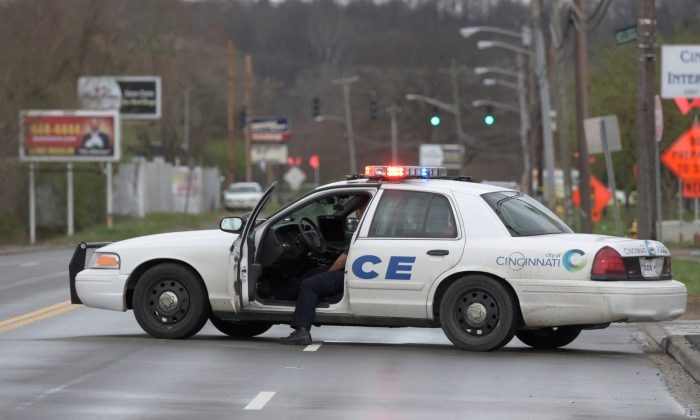 A Cincinnati police car blocks access to the scene of a mass shooting at the Cameo Nightlife club in Cincinnati, Ohio on March 26, 2017. (REUTERS/Caleb Hughes)
US

CINCINNATI—Gunfire erupted inside a packed nightclub in Cincinnati, Ohio, early Sunday morning, killing one person and injuring 14 others, and at least one shooter was at large hours after the mayhem, authorities said.

The motive behind the shooting was unclear, but Cincinnati Assistant Police Chief Paul Neudigate said on Twitter that “there are no indications this incident is terrorism related.”

“The conflict is believed to have begun between specific groups or individuals earlier in the day, escalating and ultimately leading to this tragedy occurring at the nightclub,” City Manager Harry Black said in a statement.

The shooting took place around 2 a.m. local time as hundreds of people partied inside the Cameo Nightlife club, which Black said has a history of gun violence, including two shootings in the parking lot in 2015.

“At this point it’s unclear exactly what instigated the shooting,” Captain Kimberly Williams said at a televised briefing. “Just a lot of chaos when the shots went off.”

The shooting came less than a year after a gunman opened fire at a gay nightclub in Orlando, Florida, killing 49 people. It was the deadliest mass shooting in U.S. history.

Cincinnati police initially said they believed at least two shooters were involved at the Cameo, but later Neudigate said on Twitter there was only one reported gunman, though police were still trying to determine if there were others.

Hours after the shooting, the suspect was still at large, and police did not have a good description, in part because witnesses were reluctant to cooperate, Williams told WCPO television.

Ohio Gov. John Kasich sent his condolences and said he offered state help in the case.

“Saddened to learn about last night’s shooting in Cincinnati,” Kasich said on Twitter. “Our prayers are with the victims and families of all of those involved.”

Eight people from the nightclub were admitted to the University of Cincinnati Medical Center, a spokeswoman said, with one of them in critical condition. Two others were admitted to Christ Hospital, both with minor injuries, while others were treated elsewhere and released.

The club, a large single-story structure, is a 7-mile (11 km) drive from downtown Cincinnati near the southeast corner of the city, the heart of the second largest metropolitan area in Ohio with more than 2 million residents.