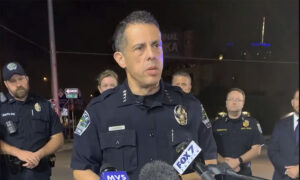 WASHINGTON—A man who identified himself as an “incel”—involuntary celibate—was arrested on Wednesday and charged with planning a mass shooting of women college students in Ohio and illegal possession of a machine gun, U.S. prosecutors said.

Tres Genco, 21, of Hillsboro, Ohio, planned to shoot women at sororities, the U.S. Department of Justice said, without identifying the university. If convicted he could be imprisoned for life. It was not immediately known who was representing Genco.

The incel movement with which Genco identified is an online network of men motivated to engage in violence against women who they believe unjustly reject their sexual or romantic advances.

An indictment said Genco, who attended U.S. Army basic training for five months at Fort Benning, Georgia, in 2019, posted materials on an incel website between July 2019 and March 2020.

The charging document said that in one post, Genco wrote about spraying women with orange juice in a water gun, citing the actions of Elliot Rodger, who killed six people and injured 14 others near a University of California campus in Santa Barbara in May 2014 before taking his own life. Before this killing spree, Rodger shot at college students with a water gun filled with orange juice.

Prosecutors said Genco wrote a manifesto in which he said he would “slaughter” women “out of hatred, jealousy and revenge …” and that in 2019 he bought Glock ammunition, a skull facemask, and a hoodie bearing the word “revenge.”

On Jan. 15, 2020, prosecutors said Genco conducted surveillance and also searched online for “how to plan a shooting crime.”

During a search of Genco’s residence in March 2020, the Justice Department said, local police found weapons and ammunition, including a 9mm semiautomatic pistol lacking identification marks hidden in a heating vent in his bedroom.