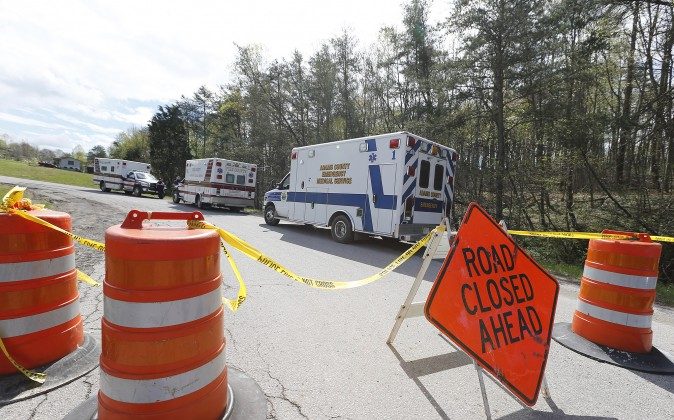 Law enforcement has closed down Union Hill Road in Pike County, Ohio, while they investigate a shooting with multiple fatalities on Friday, April 22, 2016. Authorities say multiple people have been shot to death in rural Ohio, some 70 miles east of Cincinnati. (Chris Russell/The Columbus Dispatch via AP)
Crime and Incidents

Pike County Gunman At Large, ‘Armed and Dangerous’ After Killing 7 Adults and 1 Teen

The April 22 execution-style shootings left 7 adults and a 16-year-old dead, all believed to be of the same family.

Local reports believe the victims may be of the Rhoden family, although no names have been released.

The gunman is still on the loose, said Ohio Attorney General Mike DeWine in a press conference, April 22.

“Through a preliminary investigation, it’s apparent that the gunman is not among those found dead,” DeWine said. “We believe he is at large, and a strong possibility that any individual involved in this is armed and extremely dangerous.”

Miraculously, in one of the four homes where victims were shot, three children—3-years-old, 6-months-old, and 4-days-old—were found safe.

The homes are located on Union Hill Road in between the counties of Piketon and Peebles; a remote location just 70 miles outside Cincinnati.

“We’ve been working with several county sheriff’s and we will continue to work with them all night,” Pike County Sheriff Charles Reader said.

Anyone with information on the #PikeCounty homicides can call 1-855-BCI-OHIO to speak with authorities.