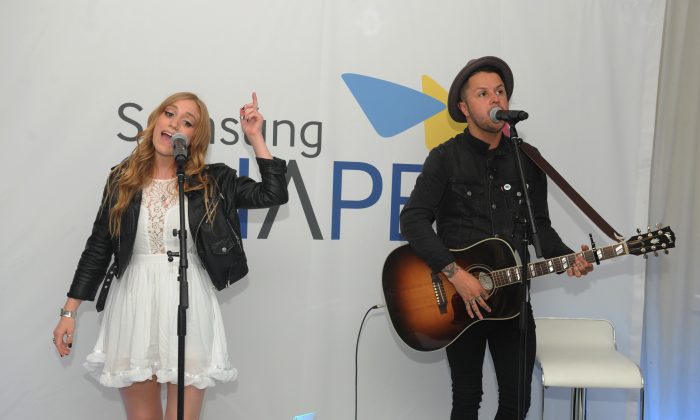 Brooklyn’s Danielle Bouchard and Mitchy Collins of Oh Honey closed out Samsung’s Summer Shape Series Thursday night in New York City with a three song set acoustic performance. Two of the songs performed were from their With Love EP.

The first, “I Love You Will Still Sound The Same,” is an insanely romantic track that raise all the questions a couple can have about getting into a lifelong commitment with each other. They then performed their breakout single, “Be Okay,” which was featured in an episode of Glee and instantly leaves a smile on your face like “Daylight” from Brooklyn’s Matt and Kim.

The duo even went on and covered TLC’s “No Scrubs” with a mashup of City High’s “What Would You Do” much to the crowd’s delight and had them clapping and singing the chorus in no time.

Once again moderated by Billboard’s Andrew Hampp, they answered questions on their quick rise to fame, touring and getting pranked by The Fray and staying optimistic.

Bouchard and Collins met through mutual friends and first started recording in May 2013. “It felt right,” they said about recording. Their sound is highly influenced by folk, pop and acoustic and their personal influences include: Bruce Springsteen, Fleetwood Mac and Sara Bareilles. Their tracks, they said, are based on life experiences and are very honest in addition to mentioning that people listen to music because they are going through something.

Recently wrapping up a tour with The Fray, Collins discussed about the time he received 8,000 text messages on his phone as a result of a prank. Fans of The Fray were told that the 100th person who texted Collin’s number (unknown to the audience) would win a meet and greet from The Fray. He later explained that his phone couldn’t function properly that night.

If there’s one thing the band wanted to leave the audience with, “it’s that if you love something, you have to keep fighting for it.”