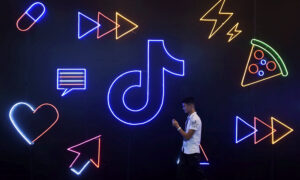 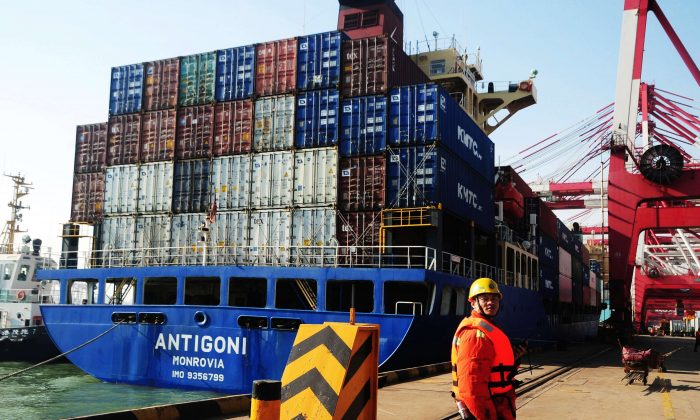 A cargo ship is preparing to leave the Qingdao port in China, March 7, 2014 (STR/AFP/Getty Images)
China

Officials Warn About Trade With China

Congressman Tom Tancredo (R-CO), a former Assistant Secretary of Defense, and other officials warned the US about trade with China on Friday.

To a crowd of about 500 in the large ballroom of the National Press Club, various foreign and U.S. government officials spoke at a forum entitled, “A Closer Look Into China.” The forum was sponsored by The Epoch Times, which has published an editorial series (now available in book format) called Nine Commentaries on the Communist Party; these articles have had the effect in the last eight months of motivating over 3 million people to renounce their memberships in the Chinese Communist Party (CCP).

The idea of the Forum, said Annett Jun Guo, editor of the Washington branch of The Epoch Times, was to discuss a “new China,” free from the hatred and violence endemic of the CCP. The Epoch Times sponsored to encourage more Chinese to clear their consciences and leave the CCP behind them, thereby bringing about the collapse of the CCP.

Can Trade Make China Into a Democracy?

One of the notions that all the speakers wanted to thoroughly refute is the belief that China will become a democracy and cease its human rights abuses by economic engagement with the West, especially with the US. Congressman Tom Tancredo recalled the discussions surrounding the debate back in 2000 on whether to provide Permanent Normal Trade Relations (PNTR) with the communist regime of China. He heard the argument how this totalitarian country would change with “engagement,” but he noted at the time that the regime was “lobbying like crazy” for the PNTR.

Then he asked rhetorically, “Who do you think knows more about China, the government or us?” He seriously doubted that the Communist regime would be lobbying so much to put themselves out of power. He thought instead that the trade and prosperity would help them retain their power and control of the Chinese people.

Tancredo believes they were lobbying to stabilize their control of the country and not concerned about being forced out of power. “It doesn’t seem rational to me.” China is offering the world’s cheapest source of labor. This means money to the American corporations’ bottom line, and he respects that. His job on the other hand, he said, is to represent the security interests of the U.S. “What is best for the corporations is not necessarily best for the security and freedom of others.” This view was similar to another one spoken later by a member of the Canadian parliament, Rob Anders, who said, “Not all trade is good trade.”

To prove that the PNTR has not had the positive effect that its proponents hoped for, the Congressman cited the occupation of Tibet, actions the Communists have made to threaten Taiwan by the anti-Secessionist law, and, in general, China’s “stranglehold” on the population. He mentioned the American technology, in particular Cisco, which has aided the regime in monitoring the actions of [the Chinese] people,” by policing the Internet. When you type in words like “democracy” or “Falun Gong,” you receive a warning that “you are using prohibited language.”

The belligerent tone of the government was manifested recently when China’s Major General Zhu Chenghu issued a threat to the U.S. that China would attack the U.S. with nuclear missiles if the U.S. “interfered” were China to attack Taiwan. Congressman Tancredo wrote an amendment to a bill now before Congress demanding that China retract the statement and remove the General.

The China Foreign Ministry said on July 15th that General Zhu remarks were personal and did not represent the position of the government. Ms. Guo commented that many people land in prison for making “personal” statements, casting doubt on the regime official statement. The New York Times<> also commented similarly that it would be “quite unusual for any official to offer strong personal opinions contrary to government policy on important matters.”

“Hide our Capacities and Bide our Time”

Frank Gaffney, Former Assistant Secretary of Defense, and founder and president of the Center for Security Policy in Washington, D.C, discussed the primary issues raised by Congressman Tancredo, in terms of a conscious global strategy. He said the leaders of China believe that “War with the US is inevitable,” which agreed with the Congressman’s view that China is getting “geared up for a war with the US.”

He explained that they want to carry out this war without necessarily using military force, but by “disabling the US” before a shot has even been fired. Gaffney suggested that the method they would use to send a nuclear device very high in the skies over the US that would effectively disrupt our electricity and computers by sending out electro-magnetic pulses (EMP). This would cause the US to transform from the 21st century to the pre-industrial stage.

Gaffney spoke of how the regime views the US as a strategic enemy and most everything China does has a sinister purpose to undermine the US. For example, the effort of the China National Offshore Oil Company (CNOOC) attempt to purchase the US oil company, UNOCAL, showing its “appetite for natural resources.” It invests heavily in T-bills to acquire strategic economic assets. Quoting many times Deng Xiao-ping, the late Chinese Premier and proponent of free trade with the West, “Hide our capacities and bide our time,” he strongly suggested that the Chinese government is really deceitful and just waiting to pounce on its enemy, the United States.

Finally, Robert Anders, Conservative member of Canada’s parliament since 1997, spoke from personal and family experience about the horrors of communism and how best to deal with China. MP Anders had been assaulted by Chinese Embassy officials in the parliament building, although the MP made light of the issue saying that it didn’t compare to what Falun Gong practitioners and other victims are facing within China. He pointed out though that the assault he endured indicates how reprehensible the regime is when it would even attack him, a representative of Calgary, in a foreign country and in the parliament building no less.

MP Anders said that China was no longer communist because its sense of purpose that it obtained from the early days of Mao was no more. Instead, China had become a Fascist state which deploys violence and totalitarian state control, with “no moral underpinnings, whatsoever.” He gave several examples of how the regime exerts fear into Chinese people living abroad and infiltrates the Chinese communities.

Another victim, a businessman whom he became acquainted with and who did not support the PRC, found that his customers were being visited by the representatives from the regime and persuaded to stop doing business with this individual. “His business was ruined,” said Anders.

All the speakers urged the public to have a more a wary eye of the Chinese Communists who have a plan to undermine the US power, military and economic, and challenge the US in the future. We have to be careful, they urged, of accepting short-term economic gains that in the end gives the regime more power and control over its own people, and makes it harder for us to see clearly the threat to our own security.