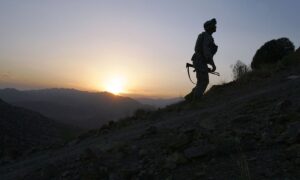 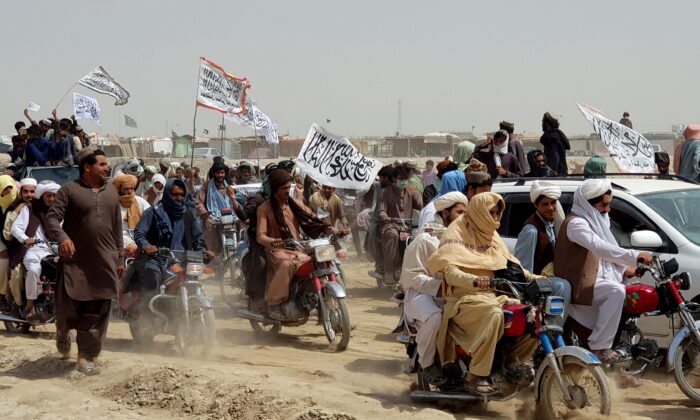 KABUL—Government officials in a western Afghan province said on July 15 that they had negotiated “an indefinite ceasefire” with the Taliban to prevent further attacks on the capital of the province.

The move came after the terrorist group secured complete control over all the districts in Badghis Province, reflecting wider gains by the Taliban over territory and infrastructure in the weeks since President Joe Biden announced the withdrawal of U.S. troops from Afghanistan by Sept. 11.

“Ten tribal elders had taken the responsibility of ceasefire, so they first talked to the Taliban, and then talked to the local government and both sides reached a ceasefire,” Badghis Provincial Gov. Husamuddin Shams told Reuters.

The Taliban reached an agreement with the tribal elders to move to the outskirts of Qala-e-Naw, the capital of Badghis, Shams said.

A spokesman for the Taliban denied that they had agreed to a ceasefire, but said they had left the city to avoid civilian casualties.

“Qala-e-Naw is the only city in Afghanistan where the Taliban announced a ceasefire,” said Abdul Aziz Bek, the head of the provincial council in Badghis.

Afghan officials in the country’s capital, Kabul, didn’t respond to a request for comment.

There were conflicting reports on July 15 about who was in control of a major trading town on the Afghan border with Pakistan. The Spin Boldak–Chaman border post is the second most important crossing on the Pakistan border and a major source of revenue for the Western-backed government in Kabul.

A senior Afghan government official said on July 15 that security forces had retaken control of the town hours after the Taliban had seized it on July 14.

“It is merely propaganda and a baseless claim by the Kabul administration,” he told Reuters.

The defense ministry spokesman didn’t respond to a request for comment.

Pakistan, worried about a spillover of fighting, has shut its side of the Spin Boldak–Chaman border, which lies on the main commercial artery between the second Afghan city of Kandahar and Pakistani ports.

Clashes between the Taliban and government forces have intensified as U.S.-led international forces have been withdrawing. The Taliban have captured several districts and border crossings in the north and west.

The government has accused the Taliban of destroying hundreds of government buildings in 29 of the country’s 34 provinces. The Taliban deny accusations of extensive destruction by their militants.

The deteriorating security situation has raised fears of a new Afghan refugee crisis. President Ashraf Ghani met regional leaders in Uzbekistan on July 15, and Pakistan said it would host a conference of senior Afghan leaders in an effort to find solutions.

Diplomatic efforts have focused on pushing the rival Afghan sides to make progress towards a ceasefire.

Pakistan was accused for years of backing the Taliban with the aim of blocking the influence of India, its old rival, in Afghanistan. But Pakistan has denied those accusations and now says it wants to encourage negotiations to ensure a peaceful outcome.

Pakistani information minister Fawad Chaudhry wrote on Twitter that Pakistan was arranging more talks and that important leaders, including former President Hamid Karzai, who remains an influential figure, had been invited.

Chaudhry said Taliban leaders wouldn’t be attending, as Pakistan was holding separate talks with them.

Karzai and some top Afghan political leaders are expected to fly to Qatar this weekend for talks with members of the Taliban who have an office in the capital, Doha.

The Taliban terrorist group ruled Afghanistan from 1996 until they were ousted in 2001, weeks after the Sept. 11 attacks on the United States. They’ve fought since then to expel foreign forces and topple the government in Kabul.