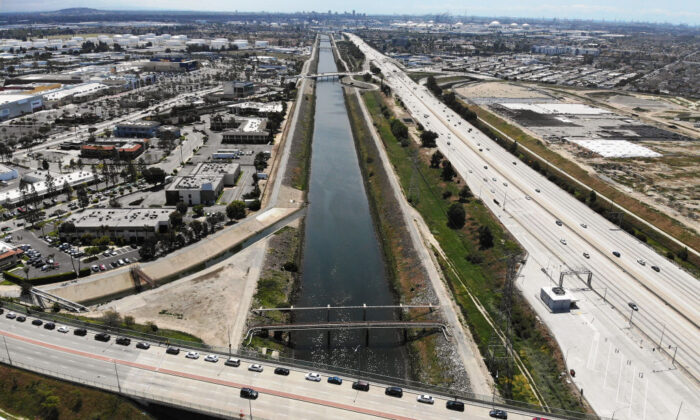 The foul odor emanating from Dominguez Channel was declared a “public nuisance” at a special Carson City Council meeting on Oct. 11, with officials promising a reimbursement plan to help residents pay for air filters.

Mark Pestrella, LA County’s director of Public Works, said during the meeting that organic waste material drying out in the channel after low tide was the likely cause of the smell.

“Since Monday, the Department of Public Works … has been onsite at this location,” Pestrella said. “And we’ve been whittling down where we think the smell is coming from … and looking to see and make sure that we eliminate all potential causes, in particular, petrol, potentially petroleum, and other causes, with the refineries being nearby and all that.”

Pestrella said that currently the Department of Public Works is attributing the smell to hydrogen sulfide, a gas that is sometimes naturally occurring and sometimes used in manufacturing.

According to Pestrella, the water is sitting among decaying vegetation that grows in the channel. The decay of that vegetation “routinely creates the release of hydrogen sulfide” as a byproduct of the process.

Pestrella said plankton and other small organics that wash in from the ocean could contribute to the vegetation decay and smell.

Pestrella said typically the decaying process would take only two days; however, this event is unusual in that it has persisted for over a week with high concentrations throughout the community.

The Public Works department is expected to have a course of action this week to accelerate the decaying process to get the odor to cease, which could potentially include physically moving the water, aerating the water, or chlorinating the water.

“We want to do this carefully, because we can actually cause the problem to get worse if we don’t take the right steps in the right order,” Pestrella said. “And that has to do with what’s going on with the biology … think about stirring the pot, if you will; if you have a lot of muck, stirring it might release more gas rather than containing. And actually, the water right now is sort of containing and filtering the bubbling of the gas as it comes up.”

Effects on Public Health and Reimbursement for Residents

Davis noted that humans pick up and are bothered by the hydrogen sulfide smell when it’s present at low levels, but don’t pick it up at a higher concentration of the gas, which is a more imminent threat to health. At low levels, hydrogen sulfide can cause headaches, eye irritation, nausea, and vomiting. Beyond those symptoms, he said, there’s little health risk.

Davis recommended that people experiencing persistent symptoms should vacate the area and see if the symptoms decrease; if not, they should contact their health provider.

Davis also recommended that residents near the Dominguez Channel keep the doors and windows to their houses closed, and suggested that residents purchase a high-efficiency particulate air (HEPA) filter to improve air quality in their home.

Pestrella said that the Los Angeles County officials and the Public Works Department are working on setting up a process for residents who had to purchase the HEPA filter to be reimbursed, with a Public Works call center open for residents on Oct. 12.

“So as we identify people who’ve been impacted, we do want to talk to the residents and we want to communicate with you about how a resident can be reimbursed for their costs due to this incident,” Davis said.

Neither Pestrella nor a County Department of Public Works spokesperson responded to a request for comment by press time.