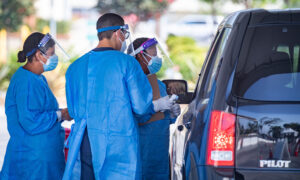 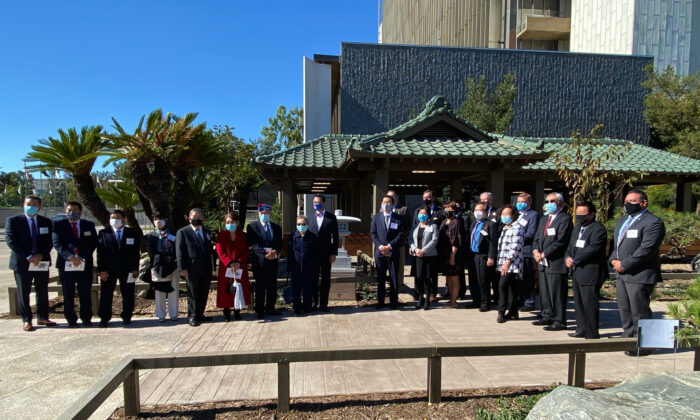 Located in Santa Ana behind the Orange County Courthouse, the garden was originally a gift from Japanese Americans to the county community as a symbol of friendship and gratitude for the opportunities given to them.

Donations from 641 Japanese-American families and organizations raised $50,000 in the 1960s to pay for the 75-foot by 102-foot garden and tea house structure. The project was subsequently approved by the Orange County Civic Center Commission on June 17, 1969.

At the commemoration event, Orange County Supervisor Lisa Bartlett discussed the importance of Japanese Americans in the region and their significance in her own life.

“Growing up as a Japanese American in Orange County, I have seen the tremendous influence Japanese Americans have had on the economic and agricultural vitality of our community,” Bartlett told the audience.

“As a child, I remember the many farms throughout the county that were run and owned by Japanese Americans. The seeds of Japanese influence in Orange County was sown many, many years ago. They continue to flourish to this day, and they’ll hopefully blossom for many years to come.”

Supervisor Andrew Do called the garden “a magnanimous symbol of friendship and tribute to the Japanese heritage.”

“To me, as a 45-year resident of the County of Orange, and also as an immigrant, this tea house is a tribute to the Japanese-American farmers, families, residents, whose agricultural businesses helped build Orange County into what it is today,” he said.

“Orange County would not be here—we would not have the standing nationally as a manufacturer of a lot of the produce that was consumed around the U.S. from the turn of the 20th century to today—without the contribution of the Japanese-American community.”

Akira Muto, Consul General of Japan in Los Angeles, spoke to the audience about the vital role Japanese Americans have played for many years in Southern California.

“I extend my gratitude for all the contributions made by the Japanese-American pioneers who established the foundations of the dynamic community we have been blessed with today. The garden is an excellent example of where grass roots exchanges have brought greater understanding,” Muto said.

The Orange County Nikkei Coordinating Council in turn donated a Japanese stone lantern and time capsule in commemoration of the anniversary—but the county will wait until 2021 to bury the time capsule due to the COVID-19 pandemic.

Other notable people present at the event included Keiko Sadakane, the only surviving member of the Japanese American Community Services Board; Don Miyada, one of the oldest living members of the famous Japanese-American World War II 100th Infantry Battalion; and Orange County supervisors Don Wagner and Doug Chaffee.