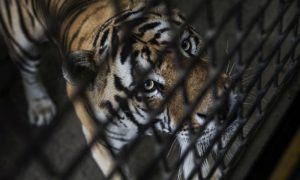 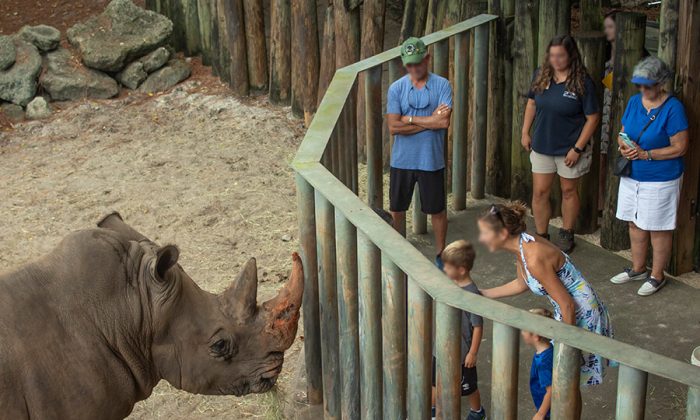 A rhinoceros at the Brevard Zoo in Florida in a file photo. (Brevard Zoo)
US News

Zoo officials in Florida emphasized on Jan. 2 that the rhinoceros that touched a girl who managed to get into the animal’s enclosure would not be punished.

The Brevard Zoo issued a statement clarifying what exactly happened on Tuesday.

The zoo said, repeating an earlier statement, that the young girl entered the rhino yard, but added that she “did not ‘fall in’ from an elevated area as some have speculated.”

“Rhino Encounter participants stand on ground level and are separated from the animals by steel poles. This child stumbled through the poles, at which point at least one of the rhinos touched the child with their snout. The child was retrieved in a matter of seconds and transported to a local hospital via ambulance,” the zoo said in the statement.

The welfare of the rhinos was never compromised and they will not be ‘punished’ in any way.”

Officials said they had suspended the Rhino Encounter, which allowed participants to touch the rhinos through the steel poles.

According to the zoo’s website, the Rhino Encounter lets people “meet our magnificent, massive rhinos up close and personal” in a zookeeper-led experience. The experience was available twice daily.

It had taken place since 2009 without incident before Tuesday, the zoo said in an earlier statement. But after the incident, the encounter was going to be put on pause as officials review how it works.

The child has not been identified but was said to be 2 years old. Zoo spokesman Elliot Zirulni said on Tuesday that after the girl entered the rhino area, “the snout of at least one of the rhinoceroses made contact with the child.”

He clarified that the snout is below the rhino’s horn near its mouth.

The zoo has four southern white rhinoceros, which hail from central and southern Africa, two males named Frankie and Howard and two females named Uzuri and Kibibi. The newest addition, Frankie, who weighs 5,300 pounds, joined the group in October. It’s not clear which one touched the girl.

The girl’s parents rescued her from the exhibit and rushed her to the front of the zoo, reported WKMG. She was then flown to Arnold Palmer Children’s Hospital in Orlando for treatment. The girl’s mother was also rushed to a different hospital for treatment after hurting her arm while pulling the child from the enclosure.

A woman said in the 911 call that was obtained by WKMG, “We had a child fall off the African platform into the rhino exhibit.”

She said that she believed the fall was accidental and that the girl was conscious, breathing, and alert after being pulled from the enclosure. She told the dispatcher that she thought the toddler fell from between 10 feet and two stories.

The girl was doing well, the girl’s father said in a statement released through the hospital later on Tuesday.

“Today has been a trying day for our family. We’re thankful to everyone who has reached out with their concerns. Our daughter is in good care at Arnold Palmer Hospital and is doing well,” he said.

“My wife was also treated for her injury and has been released from the hospital. At this time, we ask for privacy as we focus on our daughter’s recovery.”