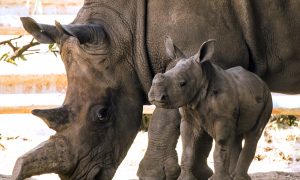 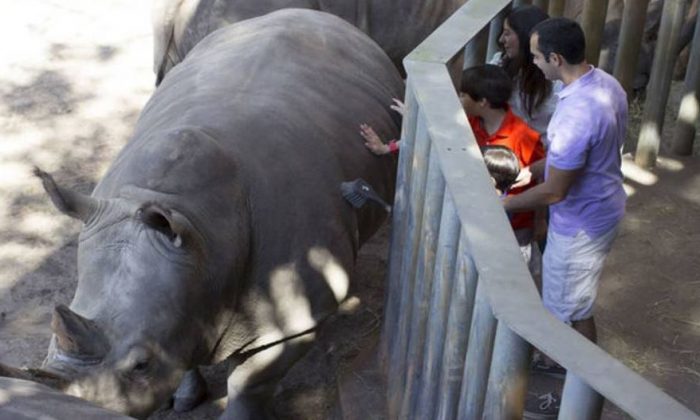 A rhino at the Brevard Zoo in a file photo. (Brevard Zoo)
US News

A 2-year-old girl was injured after falling into the rhino exhibit at a Florida Zoo on Jan. 1.

The girl was participating in a hands-on experience with the rhinos called Rhino Encounter when she fell between two poles and into the animals’ yard.

The incident happened at the Brevard Zoo in Melbourne.

“According to witnesses, the child stumbled and fell in between two of the poles and at this point, the snout of at least one of the rhinoceroses made contact with the child,” zoo spokesman Elliot Zirulni said in a statement (pdf).

He clarified that the snout is below the rhino’s horn near its mouth.

The girl’s parents rescued her from the exhibit and rushed her to the front of the zoo, reported WKMG. She was then flown to Arnold Palmer Children’s Hospital in Orlando for treatment. The girl’s mother was also rushed to a different hospital for treatment.

The specific injuries of the girl weren’t detailed but officials told WESH that the mother hurt her arm while pulling the girl out of the enclosure.

The Brevard County Fire Rescue confirmed that it responded to the zoo on Tuesday. “The child was trauma alerted to a pediatric hospital & mother was ground transported to an Orlando hospital for treatment,” it said in a statement.

Officials said that the rhino that came into contact with the girl will not be punished. Officials did not specify which rhino that was.

According to the zoo’s website, the Rhino Encounter lets people “meet our magnificent, massive rhinos up close and personal” in a zookeeper-led experience. The experience is available twice daily.

It has taken place since 2009 without incident before Tuesday, the zoo said in the statement. But after the incident, the encounter will be put on pause as officials review how it works.

Zoo officials: 2-year old fell through these bars during a rhino encounter. pic.twitter.com/0aewuPM2uc

“Our number one concern is the safety and welfare of our guests and our hearts go out to the family,” said Keith Winsten, the zoo’s executive director, in the statement. “Safety has always been of paramount importance to us and we are suspending these encounters until we have thoroughly reviewed our processes and procedures to ensure this cannot happen again.”

He said that children younger than 3 years old shouldn’t participate in the experience unless they’re being held by a parent or guardian. Since the injured girl stumbled, she apparently wasn’t being held by one of her parents.

The zoo has several southern white rhinoceros, according to a page on the site, which hails from central and southern Africa.

There are four of the rhinos, two males named Frankie and Howard and two females named Uzuri and Kibibi. The newest addition, Frankie, who weighs 5,300 pounds, joined the group in October.

Fully grown white rhinos can weigh up to 6,000 pounds, according to the International Rhino Foundation.

In contrast to the nearly extinct northern white rhino, the southern white rhino is still viable with approximately 20,000 still alive worldwide, according to the foundation. Rhinos are grazers who typically live in savannahs and live up to 50 years of age.