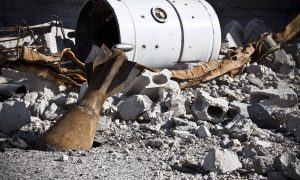 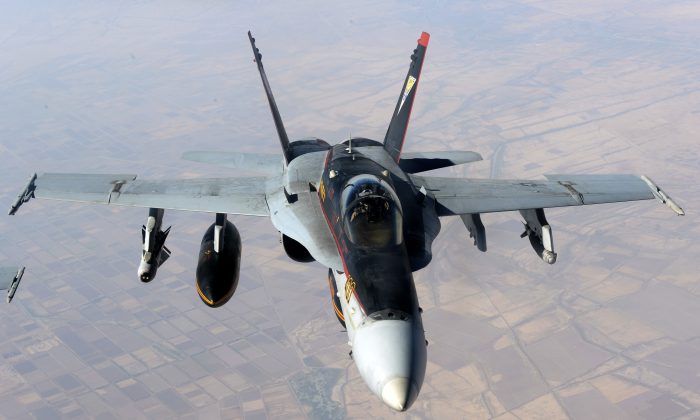 A US Navy F-18E Super Hornet supporting operations against the militant Islamic State group, leaves after receiving fuel from a KC-135 Stratotanker over Iraq, on Oct. 4, 2014. US-led airstrikes and Iranian aid have helped Iraqi troops, militiamen and Kurdish fighters take back bits around Islamic State-held territory, but recapturing it all remains far out of reach for this country held hostage. (AP Photo/US Air Force, Shawn Nickel)
Middle East

ANKARA, Turkey—Turkish jets hit Kurdish rebel targets in northern Iraq in a new raid against the separatist group, authorities said Wednesday, as Turkey’s opposition pro-Kurdish party called for an immediate end to the violence and the resumption of peace efforts.

The warplanes overnight pounded about half a dozen positions, including shelters and storage facilities, belonging to the Kurdistan Workers’ Party, or PKK, a government statement said. Locations included the group’s mountainous stronghold in Qandil.

Turkish jets have been attacking rebel positions in northern Iraq and in southeastern Turkey in a dramatic escalation of tensions that has left an already fragile peace process with the Kurds in shatters. The airstrikes came after the rebels claimed responsibility for the killing of two policemen.

Kurdish activists have held the government responsible for a suicide bombing — blamed on the ISIS group — accusing it of not doing enough to stop the extremists’ activities.

Selahattin Demirtas, leader of the pro-Kurdish People’s Democratic Party, called for the peace process to resume as parliament prepared to hold an extraordinary session — possibly behind closed doors — to discuss the attacks by the rebels and the ISIS group, and Turkey’s response.

“We need to immediately create the conditions for an immediate return to the environment of truce and to the process of dialogue,” Demirtas said.

His call came at the same time that a prosecutor demanded that Demirtas’ parliamentary immunity be lifted so that he can be prosecuted for insulting Turkey’s ruling party. The prosecutor petitioned parliament a day after President Recep Tayyip Erdogan made a call for prosecutors to act against Kurdish party leaders for alleged links to the outlawed PKK..