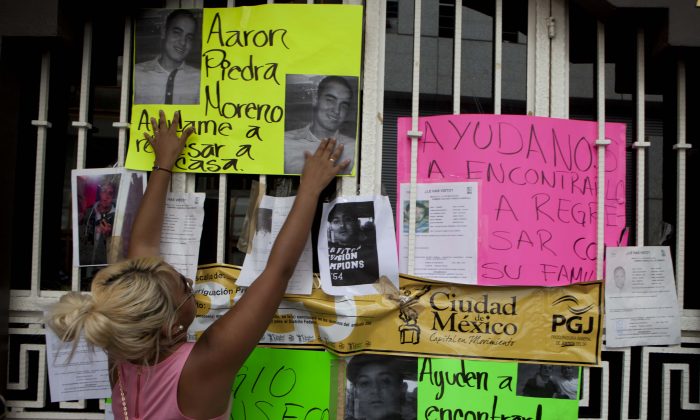 Friends put pictures in the bar entrance of their recently disappeared relatives in Mexico City, May 30, 2013. (AP Photo/Eduardo Verdugo)
Americas

Surveillance footage from a Mexico City bar reviewed by police hasn’t shown any evidence of an abduction of 12 young people, who have now been missing for more than a week, an official in the city prosecutor’s office said June 3.

The official said investigators still had several more hours of footage to review but they hadn’t found any scenes of gunmen kidnapping the group as described by a witness.

Police also did not find evidence of a mass abduction or violence inside the after-hours bar cited by a witness, the official said.

The official agreed to talk about the case on condition his name not be revealed because he wasn’t authorized to discuss an investigation still in progress.

A man who said he escaped the abduction from the bar on May 26 told authorities that masked men with large guns and SUVs kidnapped the group in broad daylight.

The man talked to authorities when he accompanied one of the missing relatives to file a report, but authorities haven’t been able to locate him since then, the official said.

No other witnesses have come forward, authorities have said.

The bar is on a narrow street surrounded by towering office buildings just off the city’s busy Paseo de la Reforma. The bar is also a short walk from the federal police building and the U.S. Embassy. It is considered part of Mexico City’s red light district.

According to Mexican news outlet SIPSE, the bar called Heaven was a locale for selling drugs. On May 18, a person was arrested there because he was in possession of one kilogram (2.2 pounds) of cocaine. The bar is an exclusive venue, accessible only for regulars or their friends.

According to the news portal, neighboring business owners said that the bar was frequented by clients with luxury cars and there were frequent disputes outside.

Two of the 12 kidnapped people are sons of former drug dealers who have been in prison for over 10 years. Yet, according to the SIPSE, the mothers of the two people said that their husbands’ criminal pasts has nothing to do with the abduction.

“The dad is serving time for ten years, if somebody wanted to do anything to us, they would have already done so,” said Ponce Ortiz, mother of Jerzy Ortiz (16).

According to the police, no one saw anything that Sunday at around 10 a.m. when the abduction supposedly happened and when nearby Reforma was full of people gathering for a 5-kilometer foot race, the city’s weekly urban bike ride, and an international culture fair that had just opened the day before.

Rodolfo Ríos, Mexico City’s chief prosecutor assured the families that everything will be done to locate their relatives according to SIPSE. “We are not going to be satisfied until we can say: ‘Here are your relatives,’” he said.

To achieve that goal, the city’s police force will collaborate closely with the federal police and other federal agencies.

Mexico City Interior Secretary Hector Serrano said Monday that the bar had previously been shut down by authorities but an injunction allowed it to reopen.

He said the bar’s owner was being sought by authorities. Police also have said they couldn’t locate any of the bar’s employees.