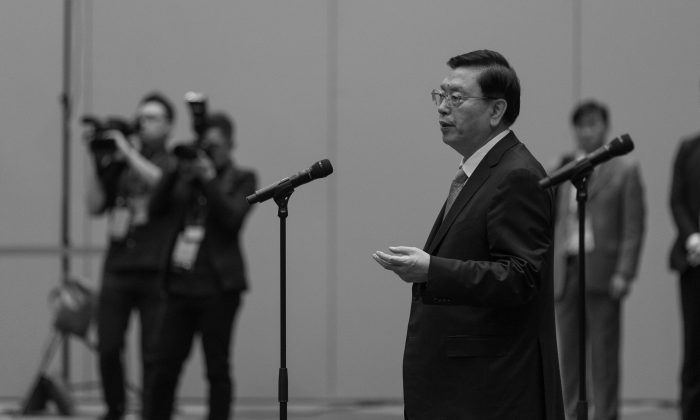 The burgeoning struggle for control in Chinese politics over the Hong Kong and Macau portfolio, playing out in the press for the last several months, has just become somewhat clearer.

The Chinese Communist Party’s internal disciplinary agency recently published a notice criticizing the current leadership of the Hong Kong and Macau Affairs Office, and demanding that it more closely listen to the supreme Party leadership.

The note comes at the conclusion of an investigation into the Office, and on the heels of several months of high-profile, and highly unusual, attacks on key political leaders by a pro-Beijing Hong Kong newspaper.

The unflattering assessment of the Chinese department for the affairs of Hong Kong and Macau by the Chinese Communist Party’s internal disciplinary police serves as an indirect indictment of top Chinese overseer Zhang Dejiang ahead of an important Party conclave.

The Hong Kong and Macau Affairs Office’s leadership is not “strong or powerful enough,” and doesn’t staunchly enforce the “relevant policies from Party Central,” according to a statement from the Central Committee for Discipline Inspection on Oct. 15.

The Office, an administrative agency in the Chinese regime’s State Council, didn’t subject appointment of personnel to “rigorous procedures.” It was also “lax” and failed to “exert effort” in “strictly governing the Party,” or “cong yan zhi dang,” a phrase that Xi Jinping has placed much emphasis on.

The statement added that the inspection group received “clues” concerning the “problematic issues of some leading cadres,” and that this has been reflected to the anti-corruption agency and Party’s Organization Department for “handling.”

Wang Guangya, director of the Hong Kong-Macau Affairs Office, said he “sincerely accepted” the discipline action report, and that his department would rectify the problems and tighten Party discipline.

“The Hong Kong-Macau Affairs Office is in trouble” over the discipline report, said current affairs analyst and commentator Heng He. However, “the problems identified by the discipline inspection report are not important because the real issues are not always reflected in the published statement.”

Heng He added that the discipline report is almost certainly aimed at getting Zhang Dejiang, the Politburo Standing Committee member who heads the small but powerful policy group on the semi-autonomous regions of Hong Kong and Macau, to take “full responsibility” for the problems in the Hong Kong-Macau Affairs Office.

Most recently, Zhang and his political backer, the former Chinese leader Jiang Zemin, was the subject of a smear campaign by Sing Pao Daily. Sing Pao, a pro-Beijing Hong Kong newspaper, blamed Zhang for the ills and troubles encountered by Hong Kong, and said that he wasn’t held accountable because Jiang was his “umbrella.”

Observers say that the attack of Hong Kong’s Chinese overseer by a publication aligned with the Chinese regime is highly irregular, and suggests that the faction overseen by Jiang Zemin is being put on notice.

Heng He thinks that the timing of the discipline inspection report’s release is significant because it comes within days of the Communist Party’s Sixth Plenary Session, a key political conclave that will address the issue of “strictly governing the Party.”

In an announcement near the end of July, Xi Jinping said that the conduct and discipline of “high-level cadres in the Central Committee, the Politburo, and the Politburo Standing Committee” is on the agenda for discussion at the 6th Plenum.