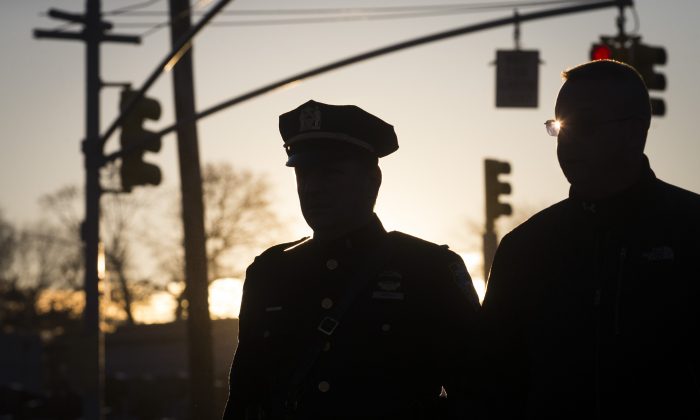 Police officers arrive at the funeral of New York City police officer Rafael Ramos in the Glendale section of Queens, Saturday, Dec. 27, 2014, in New York. Ramos and his partner, officer Wenjian Liu, were killed Dec. 20 as they sat in their patrol car on a Brooklyn street. The shooter, Ismaaiyl Brinsley, later killed himself. (AP Photo/John Minchillo)
US

Officers Shot at in Los Angeles and Florida Over the Weekend: Reports

Over the weekend, police officers in Los Angeles and Florida were shot at. None of the cops were injured. The LAPD placed itself on a citywide tactical alert on Monday afternoon.

Two suspects fired on two LAPD officers on Sunday night as they were driving their patrol car in South Central Los Angeles. One was arrested with two guns, including a rifle, and the other is still at large.

The officers were responding to an unrelated radio call at around 9:30 p.m. local time.

One of the officers returned fire at the shooters.

“A couple of officers were rolling down the street when they observed the muzzle of a rifle firing in their direction,” said LAPD Sgt. James Shray, reported MyFox LA. “They responded to the muzzle flash.”

The motive for the shootings isn’t clear, but there is speculation it might have to do with the killing of two NYPD officers more than a week ago.

“Obviously, with what happened in New York and what we know is the sentiment right now nationwide, in the mornings or in the evenings when you put on your uniform, you’re very much aware that there are some currents of anger toward police,” Detective Meghan Aguilar said, via KABC-TV. “We’re aware that we could be a target for individuals that are angry at law enforcement right now.”

On Sunday morning, three shots were fired at two deputies in Pasco County Sheriff’s Office while they were sitting in their patrol car.

“Both deputies reported hearing the whizzing sound of each projectile as they flew by,” the sheriff’s office told CNN. “Deputies did not see the suspect or the vehicle from which the shots were fired.”

The suspect or suspects in Florida were not arrested or identified.