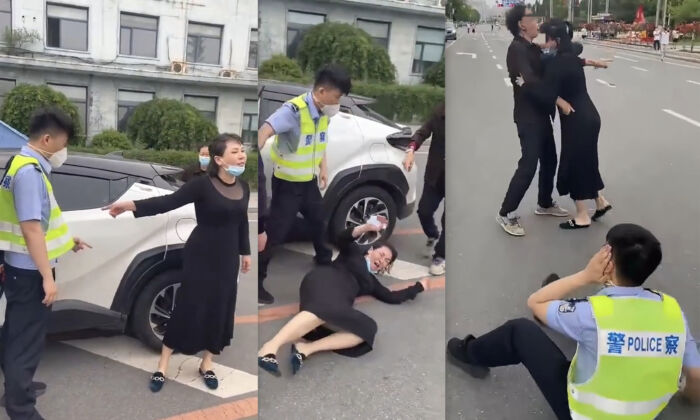 A police officer pushed a woman to the ground and then claims to be injured in Dandong, Liaoning Province on June 21, 2022. (Public Domain/Screenshot via The Epoch Times)
INSIDE CHINA

A conflict between a police officer and a father-daughter pair in northeastern China’s Dandong city angered the Chinese people. Under pressure from public opinion, the regime was forced to ease some of the restrictions in the city on June 24.

Such a move is a big deal for a city that had been locked down for over 60 days to curb the COVID-19 outbreak.

On June 22, a local senior citizen, who wanted to leave his residential compound, criticized several police officers who blocked him. He said: “Even the North Korean regime won’t treat people this way.” From the video that went viral on June 23, the old man, surnamed Song, said there are seniors who need emergency treatment every day in his neighborhood because of the lockdown. He asked: “What crimes did we do? Why do you treat us this way?”

The old man said that the Chinese regime installed barbed wire fencing every 65 to 90 feet in the city; and that even in the world’s most authoritarian country, the North Korean regime gives people limited freedom and allows them to move around the city.

The east side of Dandong sits across the Yalu River from North Korea, and has a population of 2.19 million.

A police officer and a father-daughter pair had a dramatic conflict on the street in Dandong on June 21. The whole incident was videoed by those nearby, one of whom uploaded it online. It quickly spread across China.

In April, the father had surgery for a perforated bowel and in June, was still taking medication.

On June 21, the father and his daughter each had a COVID-19 test and received approval from the community authorities to leave the compound to buy medication between 5 p.m. and 7 p.m. on the day after receiving negative test results.

At the assigned time window, the daughter drove with her father to pick up the medication at the hospital.

At a checkpoint, a police officer and two regime staff stopped the pair. After they showed the pass and their negative test results, the police refused to let them pass because their health codes were in yellow.

The health code is a QR code on a cell phone that the Chinese regime uses to control people’s movements. The code of residents who live in a neighborhood that has COVID patients is yellow. The infected people and any close contacts have a red code. Those who haven’t visited a so-called risky area in the past 14 days should have a green code.

Since they weren’t allowed to go to the hospital, the father-daughter pair decided to go home. However, the officers wouldn’t let them leave. The daughter then left the car and tried to talk with the officers. One police officer then pushed her to the ground.

When the father saw his daughter pushed down, he quickly moved to slap the officer’s face. Just then, the officer sat down and covered his face with his hand even though the father had not struck him.

“Did you record it [the slap, on video]?” the officer asked one of the regime staff. After hearing a positive reply, he stood up and detained the father and daughter.

On June 22, the Dandong Police announced that the daughter would be detained for 10 days for not following a police officer’s request, and the father was arrested for assaulting an officer. In China, a person will be sentenced no more than three years if the court finds that he/she assaulted an officer.

Reaction to the Video

After the video went viral, even state-run media in other cities criticized the officer. “Why do the majority of Chinese netizens support the father-daughter pair in the Dandong event? Because it has caused a lot of sad stories that police refused to let patients visit a hospital or enter a hospital during the pandemic,” state-run Chengdu Radio commented on China’s social media platform Weibo on June 23.

“How dare the police claim that the father assaulted him? The police pushed the young lady to the ground first. And the father didn’t touch the policeman’s face. They have the pass and negative test results, but the police didn’t allow them to buy medicine,” Dandong resident Yu told The Epoch Times in a phone call on June 23. “There’s no law, no moral, and no reason for people to support the police.”

Li, a Dandong resident, told The Epoch Times on June 23 that she sympathized with the father and daughter and that she had also suffered a lot from the lockdown.

“You know that when my family and I were hungry, I tried to go out to buy groceries, but was stopped several times. You don’t know how bad the lockdown is,” Li said. “Medicine is more urgent than food.”

Slight Easing of the Lockdown

State-run magazine China News Weekly reported on June 23 that Dandong had been locked down since March due to a new COVID-19 outbreak.

“The train service was stopped in early March. The airport shut down on April 2, and there were plans to reopen at the end of July. People can only leave or enter Dandong by driving a private car [if they can obtain a pass],” the weekly said.

The authorities eased some restrictions on June 24, which allowed a little movement within the city provided one has a negative COVID test within the last 48 hours.

Dandong people reported that it’s not just people that can’t move, parcels can’t be delivered to or leave the city. The extreme lockdown has made people feel hopeless.

The Chinese regime uses the COVID-19 Zero-tolerance policy to curb the virus. It locked one neighborhood after another, one city after another. People who live in the locked-down areas aren’t allowed to leave their residential compounds or homes. Most complain that they can’t go out to earn money yet still have to pay high prices for food and other basic living needs.