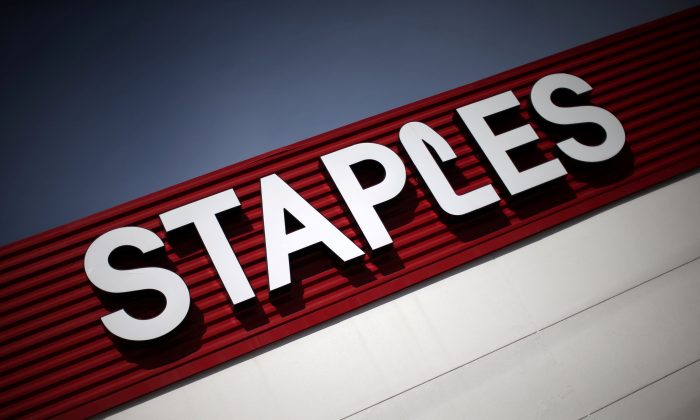 Staples Inc is in talks with private equity firms about a potential sale, sources familiar with the matter said on Tuesday, as the largest U.S. office-supplies seller tests buyer appetite for an industry rattled by online competition and hefty debt burdens.

A sale to an investment firm could help Staples escape the glare of the public market, where its shares have more than halved in three years. The move comes less than a year after its proposed merger with rival retailer Office Depot Inc was torpedoed on antitrust grounds.

The sources spoke on condition of anonymity because the process is confidential. Staples spokesman Mark Cautela declined to comment on Tuesday.

Framingham, Massachusetts-based Staples had a market value of $5.65 billion as of Monday. Staples shares rose as much as 15.5 percent on Tuesday, and were still up 10.1 percent at $9.54 in afternoon trading.

Staples, which made its name selling papers and pens, has for years been hurt by the digitization of the workplace and increased competition from online retailers including Amazon.com Inc and big-box stores such as Costco Wholesale Corp and Wal-Mart Stores Inc.

In 2015, it tried to address these challenges by merging with rival Office Depot, but the deal was called off a year later due to antitrust concerns.

Since then, Staples has announced cost-cutting plans and operational restructuring. Last year, it sold its UK business to restructuring specialist Hilco Capital for a “nominal” amount and a majority stake of its European business to private equity firm Cerberus Capital Management LP.

In the United States, it has focused on selling to small businesses in light of changing consumer habits and has embarked on an office sharing program, opening up some of its stores as communal working space.

Staples, which has 1,255 stores in the United States and 304 in Canada, last month announced plans to sell roughly 60 stores in North America.

Staples has made executive changes as well, appointing Shira Goodman as CEO in September. Goodman, who had held a number of positions as Staples, also worked for years as a consultant at consulting firm Bain and Co. Private equity firm Bain Capital LLC helped support the founding of Staples in the 1980s and took it public in 1989. Staples has the largest market share of office supply stores in the United States at 48 percent and that share has been increasing since 2011, according to Euromonitor.

Private-equity acquisitions of retailers have become increasingly rare, as the investment firms worry about increasing headwinds facing the industry and their portfolio companies struggle with the debt burden left behind from leveraged buyouts. Retail deals comprised the smallest share of mergers and acquisitions in the first quarter of the year, according to Thomson Reuters data.

Moody’s said in an outlook note last year that the office supply sector will continue to struggle, with operating profit expected to be nearly flat in 2017.

Still, Staples’ bonds maturing in 2018 are trading at face value, indicating investor confidence in the company.

In its most recent quarter, Staples recorded a net loss of $615 million and a sales decline of 3 percent compared with the prior year. It expects to have at least $500 million in free cash flow this year, according to its quarterly earnings.

The Wall Street Journal first reported earlier on Tuesday that Staples was exploring a sale.