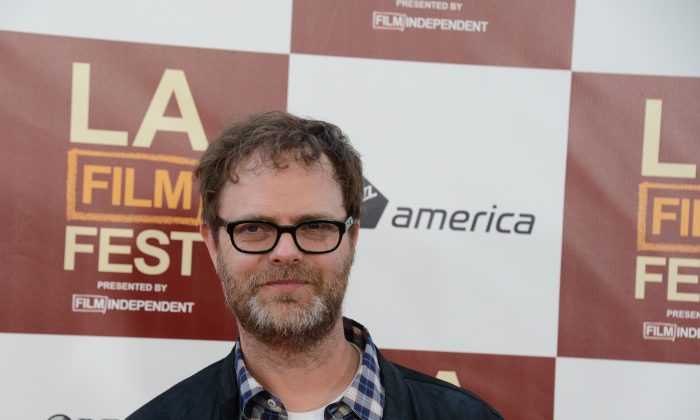 “Office” star stranded: Rainn Wilson, who plays Dwight Schrute on “The Office,” was stranded at the airport as he was traveling with some of his co-stars on Friday to Scranton, Penn.

He said to never fly on US Airways. “So @USAirways just screwed me & half the cast of The Office. Conctng flight left BEFORE departure time. Sorry Scranton won’t see u til tom,” he tweeted.

Wilson added: “The plane was a 20 seater, missing 7 people who had obviously just landed & it leaves 10 minutes EARLY!”

“I do understand your frustration. I’m sorry that we aren’t able to get you there sooner!” said a representative from US Airways, according to the Daily Mail.

“The Office” will have its finale at the end of this season after eight years.

Scranton, Penn. is where the fictional workplace of “The Office” is located. The cast and crew were apparently on their way  for a fan party for the end of the show.

Steve Carrell, who played bumbling manager Michael, will not partake in the final episode.

“I think Steve felt, and I agree, that the ‘Goodbye, Michael’ episode was his goodbye and he didn’t want to overshadow the ending that all the other characters deserved,” producer Greg Daniels told Reuters this week.

He added:“After attempting to beat that (British) ending in a number of different ways, we ended up doing something very similar. We are trying to get more time and the network (NBC) is being very creative about scraping some more time without us having to start the finale at a weird time that will cause half the audience to miss the first 10 minutes.”