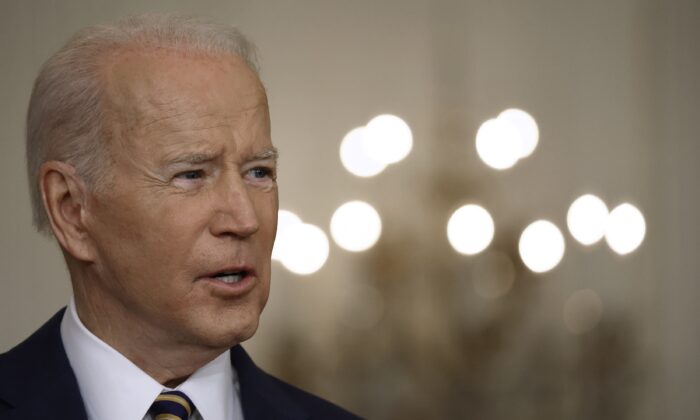 President Joe Biden talks to reporters during a news conference at the White House on Jan. 19, 2022. (Chip Somodevilla/Getty Images)
Viewpoints

Of Cabals and Elections

So does President Joe Biden.

Maybe the darndest of the president’s many darn expostulations (I confine myself to those that are intelligible) was his warning last week that the 2022 elections “easily could be illegitimate.”

Why would the president of the United States—joined by his vice president, Kamala Harris—preemptively warn that an election some 10 months in the future might be illegitimate?

Because, like the rest of the Democratic faithful, the only elections he regards as legitimate are ones that the Democrats win.

That’s a win for the Constitution, of course, which vests the power to determine election rules in the state legislatures. It’s a loss for the Democrats, though, because it has become increasingly clear that they can’t win presidential elections without fiddling with the rules.

The trouble this time is the plunging poll numbers of the entire Democratic establishment.

Joe’s numbers are in the tank.

Kamala’s are under the tank.

Every psephologist in Alpha Centauri expects the Democrats to lose the House in a historic tsunami of red redress.

The Democrats will lose 40, 50, maybe 60 seats. Some are predicting 70 seats will switch from blue to red in the House.

The Senate is more dicey, but more and more observers believe the GOP will flip the Senate as well.

But remember the premise.

Elections are only legitimate if Democrats win.

The 2022 midterms are almost certain to be a rout for Democrats, especially in the House, but also, if by a less dramatic margin, in the Senate and in many state elections.

Ergo, to the Democratic mouthpiece, the midterm elections will by definition be illegitimate.

To rubes like you and me, that seems preposterous.

We think that a free, open, and democratic election is one in which the election rules are known beforehand and everyone who is entitled to vote has an equal opportunity to do so.

That goes completely against the grain of the anti-democratic Democratic mindset.

One of the most remarkable essays about the 2020 election was “The Secret History of the Shadow Campaign That Saved the 2020 Election,” published in Time magazine last February.

This is Time magazine, so the anti-Trump animus is patent on every page.

What’s remarkable, though, is that the author cheerfully—almost gleefully—describes exactly how a cabal of anti-Trump operatives swung the election against Trump and then stymied his efforts to challenge the results.

“There was a conspiracy unfolding behind the scenes,” we read.

Isn’t that exactly what Trump partisans argued, much to the ridicule and contempt of their political opponents?

Yes, but it’s different when they do it.

What began gelling in 2019 was what Time frankly acknowledged was a “well-funded cabal of powerful people, ranging across industries and ideologies, working together behind the scenes to influence perceptions, change rules and laws, steer media coverage and control the flow of information.”

This cabal, Time noted, “touched every aspect of the election.”

We knew that, right?

Taken out of context, the litany that Time recited sounds almost exactly like what many pro-Trump commentators charged:

“They got states to change voting systems and laws and helped secure hundreds of millions in public and private funding.”

Yes, isn’t that what we “conspiracy theorists” were saying all along?

“They fended off voter-suppression lawsuits, recruited armies of poll workers and got millions of people to vote by mail for the first time.”

True, too true, except that by “disinformation,” they meant certain facts about how the voting actually proceeded.

As Glenn Reynolds noted in December, “America now faces a dangerous time, internationally, domestically and economically, with obviously inadequate leadership at the top. If disaster ensues, the people who openly bragged about their efforts to install the Biden administration may wish they had kept quiet.”