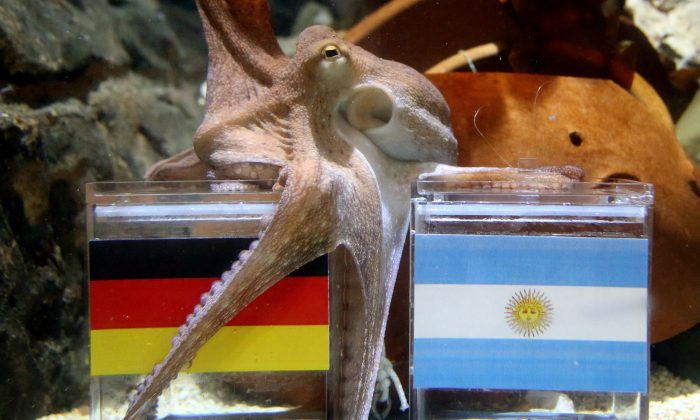 Male octopus 'Kleiner Paul' (Little Paul) embraces with its tentacles a feeding box covered with the German flag (L) next to a box with the Argentinian flag during an oracle event at Sea Life Aquarium in Oberhausen, western Germany on July 11, 2014, a few days ahead of the final match Germany vs Argentina at the FIFA World Cup 2014, to be played in Brazil. (ROLAND WEIHRAUCH/AFP/Getty Images)
Soccer

Who are the bookmakers backing to lift the 2014 World Cup?

Although they are traditional footballing powerhouses, Germany and Argentina were not very fancied to lift the World Cup before the tournament.

Germany was written off even before the World Cup kicked off due to a number of injuries to various players, and due to the tactical preferences (playing Philipp Lahm in a holding midfield position instead of full back, and playing four center backs in defense) of coach Joachim Loew.

Even after Germany demolished Brazil 7-1, some soccer analysts still don’t think the Germans are all that good.

Argentina, on the other hand, has not particularly impressed nor disappointed. All expectations were on Lionel Messi to perform, and the “Atomic Flea” did precisely that, albeit far from expected levels.

Still, coach Alejandro Sabella has managed to bring his somewhat under performing team all the way to the final, courtesy of drilling out an uncompromising defense (see Javier Mascherano’s heroics against Netherlands in the semi final), and relying on Messi to deliver the goods.

Most bookmakers are backing Germany, giving them 1.3 odds to win the Cup. Argentina are less fancied at 2.7. Odds that the match will turn out in a draw are 2.25, according to OddsChecker.

Here are some correct score odds:

There’s an app for that.

The once-every-four-years consumer frenzy, dubbed by some as the “World Cup Effect,” drives the sale of everything from the traditional jerseys and cleats to unusual items such as team-endorsed windshield wiper fluid to Versace T-shirts and, yes, mobile phone apps.

The stakes are highest for sports shoe and apparel giants Nike and adidas, who are wrestling for dominance of the soccer market.

Nike reported late last month that global soccer-related revenue rose 21 percent to an all-time high of $2.3 billion for the 2014 fiscal year leading up to the World Cup.

Beaverton, Oregon-based Nike outfitted the surprising U.S. national team and sponsors such stars as Cristiano Ronaldo of Portugal and Neymar of Brazil. The company already released innovative sock-like cleats for the World Cup, and hopes to take advantage of the global focus on the Beautiful Game with the release of the Nike Soccer App.

The application, launched this week, seeks to bring young soccer enthusiasts together at the grassroots social-media level, facilitating pick-up games and pointing wannabe stars toward training tools and even Nike Academy trials. And, of course, the app easily links to merchandise.

“It’s really hyper-focused on the 17- to 19-year-old who lives and breathes the sport. We wanted to really create a service that could help connect them closer to the things they love most about football — and that starts with the game,” said Jesse Stollak, Nike’s vice president of global digital brand.

Adidas has traditionally led the soccer sector, and expects to emerge from the World Cup with global sales topping a record $2.7 billion when the final numbers are tallied.

The German company enjoys the spotlight as an official sponsor of the World Cup. It designed the “Brazuca” ball that players are using in Brazil. And it has an advantage in that both teams in the final — Germany and Argentina — are adidas-outfitted. Argentina star Lionel Messi is part of the adidas fold.

Like Nike, adidas has also pushed beyond shoes and jerseys to capitalize on World Cup mania with its miCoach Smart Ball.

The soccer ball, which meets FIFA specifications, has embedded sensors that show players velocity, angle, spin and a host of other information — including what part of the foot is striking the ball — via, you guessed it, an app. The application, which even emits cheers for good shots, also provides feedback.

“What we wanted to do was look at soccer, which is the heritage of our brand, and look for that perfect intersection of electronics and sport that not just measures metrics of what someone did, but actually provided coaching feedback to help anyone who wants to improve at the game,” said Christian DiBenedetto, senior innovation director for adidas.

Here are some other products getting a “bounce” from the World Cup Effect:

GAME CRAZY: Even though it was released last November, Electronic Arts’ FIFA 2014 is still on Amazon’s best-seller lists, as is EA’s 2014 World Cup Brazil game. The FIFA series produces an estimated $1 billion in revenue globally for the Redwood City, California-based game maker, and FIFA 2015 is coming in September.

EA Sports also deserves kudos for creative advertising: A commercial for the World Cup game featured Landon Donovan — left off the U.S. national team— at home in a robe and playing the game as himself.

HYDRATE, HYDRATE, HYDRATE: Gatorade developed a “sports fuel system” for the Brazilian national team during the World Cup. The special bottles, created in partnership with Smart Design, contain beverages designed for each player and monitor how much players have consumed via (what else?) an app monitored by coaches. While the system isn’t available at the local sporting goods store, don’t be surprised if some American football teams start using the technology.

GOING UPSCALE: World Cup merchandise can be couture, too. Donatella Versace created the “Versace Loves Brazil” T-shirt, featuring a multicolored baroque print that includes images of soccer balls and silhouetted players, along with gold chains, flowers and leopard print. If that wasn’t enough, it features the designer’s trademark Medusa head. For just $690.

AND FINALLY: There are quite a few companies trying to capitalize on Luis Suarez, and more specifically, his jaws. If you haven’t gotten enough of apps, there’s the Luis Suarez Soccer Bite App game. Players control an animated Suarez, who goes from player to player and — probably no further explanation is necessary. There’s also a Luis Suarez bottle opener. Further explanation probably isn’t needed for that one, either.