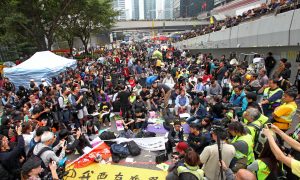 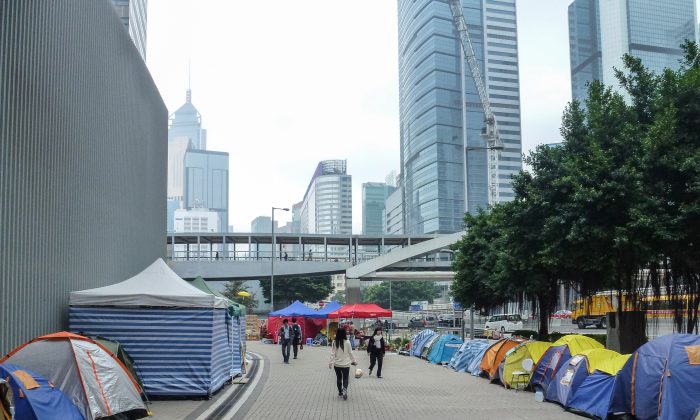 HONG KONG—”We will be back,” pro-democracy protesters promised when police cleared their tent communities from roads in Hong Kong last December, after nearly three months of sleep-in street protests. But some activists never even left.

Hong Kong saw its largest ever mass protests last year: from late September to mid-December, hundreds of thousands of Hongkongers held main roads in the areas of Admiralty, Mong Kok, and Causeway Bay, in what was known as Occupy Central, or the Umbrella Movement. Protesters demanded a repeal of attempts by Beijing to tightly restrict the election of the city’s next top leader.

After countless speeches, a televised debate between student leaders and government officials, and weeks of scuffling with the police, public support began to wane. A court order was the final blow to the campsite, with police dismantling the remaining tents and arresting participants as the media stood watch.

The authorities, however, didn’t sweep Hong Kong clean of Occupy. Three months on, there are a clutch of holdouts sprinkled around the city, asserting the right to protest, and demonstrating that for all enhanced political control, Hong Kong’s fundamental freedoms remain.

Anyone walking past Hong Kong’s government and legislature buildings in Admiralty will encounter Bob Kraft. A 57-year-old retired pastor, U.S. army veteran, and full-time protester since at least September, he has a gazebo and tent set up alongside Harcourt Road, which was once lined with neat rows of colorful tents.

“Thousands of cars drive by the LegCo protest site each day. It’s free advertisement for freedom and democracy,” he said referring to the makeshift encampments that now line the footpath on Tin Mei Avenue, which abuts the Hong Kong legislative building.

Kraft likes to make friends, and often sits on the camp chairs around “Democracy University”—a cozy library decorated with calligraphy, art works, and protest paraphernalia—talking about politics in Hong Kong with locals and wandering tourists.

“You can’t find news of Occupy on the Internet because everything is censored.”
— Mainland Chinese tourist

One of his protest buddies is Bassineo Lau, also known as “The Landlord” (as he calls himself.) The pair managed to convince the police to let them stay when everyone else was evicted, because they call themselves a “protest” (which is legal in Hong Kong) rather than an “occupation.”

Lau, a local 60-year-old retiree, tells the police that he doesn’t have a home, which makes him more difficult to evict. In the meantime, he has given himself the job of unofficial speaker and guide to the protest site.

“Our plan is to slowly make our way back to Tamar Park,” a green space next to the legislature where protesters once pitched tents, he said. The so-called “Occupy LegCo” is also edging closer to the overhead footbridge which office workers use to shuffle to work from the subway.

There were once over 1,800 tents in Admiralty, according to an unofficial online census. As of Friday, there are 149 tents, up from 78 on Dec. 16 when the occupation sites were dismantled. About a hundred protesters—retirees, students, housewives, carpenters and artists—remain.

While democracy advocates do hold the occasional workshop, there’s little in the way of active demonstrations at Occupy LegCo to disrupt the serene, almost meditative atmosphere around the soaring glass buildings. It does, however, remain a testimony of what came before.

A mainland Chinese tourist visiting Hong Kong for the first time told Epoch Times that he made the LegCo protest site the top item in his “must-see” list.

“You can’t find news of Occupy on the Internet because everything is censored,” he said. The man did not wish to have his name in print for fear of being interrogated at customs upon his return to China. “I came here to confirm that the mass pro-democracy protests in Hong Kong were real.”

Journey into the glitzy, neon-lit shopping and residential district of Mong Kok on the Kowloon Peninsula, and witness a curious spectacle at about nine o’clock each night,

Sometimes, a group believed to be pro-Beijing will stand on the opposite of the street, hurling abuse at them.

“This is a proxy ground war between the people and the Chinese Communist Party and the Hong Kong government.”
— Hong Kong Hermit, Twitter journalist

More than ten policemen in navy blue berets and jackets are on hand nearby, keeping a close eye on the proceedings.

The police usually have nothing to fear—like clockwork, the mainly middle-aged participants retract their umbrellas just before midnight and dash off to catch the last train home.

Things weren’t always this restrained. Some of the fiercest scuffles of last year’s Occupy movement took place in Mong Kok, until police evicted protesters in November. After that, many resorted to a more mobile, flash mob-style protest called “Gau Wu,” or “Shopping Revolution” in December.

These days, however, “Gau Wu has turned into a symbolic protest,” lamented Twitter journalist “Hong Kong Hermit,” who has been documenting the Occupy action in photos and Vine short video clips taken with his iPad mini.

The Hong Kong Hermit is among a number of prolific documenters of Hong Kong’s ongoing struggle for democracy. He appears regularly at these events, posting pictures and video, along with acerbic comment, to a range of social media sites.

“Social media is an essential supplement to traditional news outlets,” the Hermit said, in an interview on the street. He wanted to remain anonymous because he is a school teacher, and pro-Beijing supporters once harassed a teacher who supports Occupy. “They cannot offer the same amount of coverage as a group of dedicated individuals, but we can be in more places, watching more things.”

There was a rise in citizen journalism during the Occupy protests as Hongkongers grew disillusioned with traditional media, which is often seen as a mouthpiece for Beijing’s interests. Protesters and casual observers preferred to post their pictures, videos, and reports via independent online sites or social media.

The English-speaking group of Twitter journalists is made up of locals and expats who, almost exclusively, support Hong Kong’s democracy movement. Hermit feels that “the cause is righteous and necessary.”

“LostDutch,” a financial trader and native of the Netherlands, was caught in police tear gas on Sept. 28 and started reporting because he thinks that the demonstrations wouldn’t be as peaceful in Europe. Like Hermit, LostDutch prefers not to be named.

Local school student Joel Christian was originally a protester, but the aspiring journalist started tweeting more regularly after joining a team on the social website Reddit which aggregates the news around the clock.

These days, Hermit, LostDutch, and Christian can be found at anti-trading protests near the Chinese border, taking pictures of police aggression and video streaming the rallies directly to the web.

“This is a proxy ground war between the people and the Chinese Communist Party and the Hong Kong government,” said Hermit during a lull in the Yuen Long protests. “These confrontational, direct groups will force the governments to address local issues instead of pushing them away.”