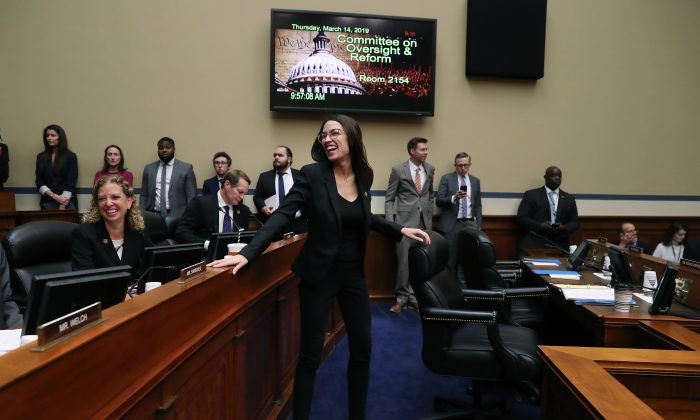 Ocasio-Cortez Blasts Fox News for Getting Her Name Wrong, But There’s a Problem

Freshman Democratic socialist Rep. Alexandria Ocasio-Cortez (D-N.Y) laid into Fox News in a series of Twitter messages on March 20, criticizing the channel’s opinion hosts for not using her full name, but evidence surfaced later to challenge her claims.

Ocasio-Cortez accused Fox News opinion hosts Sean Hannity, Laura Ingraham, and Tucker Carlson of referring to her only as “Cortez” instead of “Ocasio-Cortez” and suggested that the hosts are intentionally stereotyping her.

“By the way: Fox News likes to say my name (incorrectly) as ‘Cortez,’ which I can only imagine is [because] that sounds more ‘stereotypically’ Hispanic + probably incites more ‘anxiety’ for them,” Ocasio-Cortez wrote on Twitter. “Pro Tip: My last name is not ‘Cortez,’ just as theirs isn’t ‘Ingra’ or ‘Carl’ or ‘Hann.”

My last name is Ocasio-Cortez. Full stop. That’s my name.

No, you can’t say “Cortez.” I’ve never used that in my life. “Cortez” is referring to someone else.

Even if they‘re trying to be rude + wrong, my dad’s last name was Ocasio anyway.

(His name was hyphenated too, though.)

“My last name is Ocasio-Cortez. Full stop. That’s my name. No, you can’t say “Cortez.” I’ve never used that in my life. “Cortez” is referring to someone else. Even if they‘re trying to be rude + wrong, my dad’s last name was Ocasio anyway. His name was hyphenated too, though,” the freshman congresswoman added.

“For the curious, in Latinx culture children take *both* their parents’ names,” Ocasio-Cortez continued. “It’s not a ‘progressive, new thing.’ It’s just how some names work. PR hyphenates, others mark differently. Your last name = the families that came together to make you. AOC is also fine though :),” she finished.

Ocasio-Cortez’s accusations appear to be wholly unfounded, according to a review of Fox News footage conducted by Grabien Media. Ocasio-Cortez was mentioned 188 times on “The Ingraham Angle” and “Hannity” but the hosts referred to her correctly each time.

The only reference to Ocasio-Cortez as “Cortez” was made by a guest on the March 14 “Ingraham Angle,” according to Tom Elliot, the founder of Grabien Media. The host herself never got the name wrong. In one episode of “Hannity,” Ocasio-Cortez was mentioned 20 times, but Hannity said her name correctly each time.

“Unless [Ocasio-Cortez] has something to back up this claim, it would seem she owes apologies to Hannity and Ingraham. Randomly accusing people of prejudice is indecent, [especially] when it will inevitably be used for more boycott fodder,” Elliott wrote on Twitter on March 20.

“The only person I’ve noticed who obsesses over [Ocasio-Cortez] being Hispanic is [Ocasio-Cortez] herself,” Eliott added. “It’s a constant topic. Conservative media generally focus on her overzealous Green New Deal, her sketchy campaign finance issues, and her frequent hypocrisy.”

Ocasio-Cortez scored a surprise election victory by unseating a long-term incumbent Democratic lawmaker in New York in the midterm election last year. Her victory drew the attention of the media, which she has managed to maintain with radical socialist ideas such as the so-called Green New Deal and taxing the wealthy at a 70 percent rate.

The media spotlight gave Ocasio-Cortez a nearly unprecedented rate of name recognition for a freshman lawmaker, with only 29 percent of Americans saying they didn’t recognize her name in a February survey by Gallup.

But the name recognition came at a price. Ocasio-Cortez’s unfavorable rating grew by 15 points since her primary victory last year to February this year. According to Gallup, 41 percent of Americans surveyed had an unfavorable view of Ocasio-Cortez in February.

Ocasio-Cortez introduced the socialist Green New Deal resolution in Congress last month. The Green New Deal would nationalize the energy industry in the United States, handing the government complete control over how the nation produces and consumes energy. The Democratic Socialists of America and Communist Party USA are backing the Green New Deal.