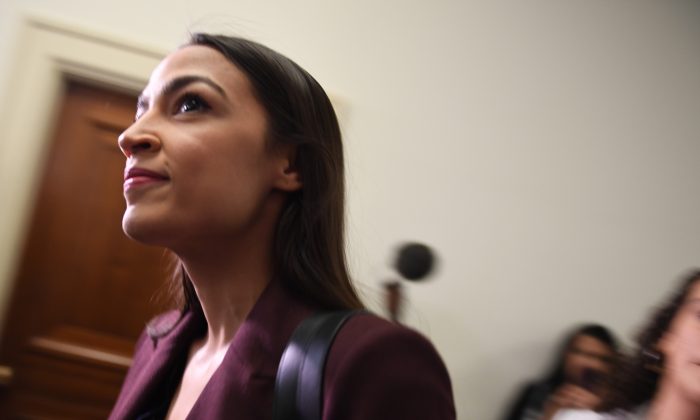 Democratic socialist Rep. Alexandria Ocasio-Cortez (D-N.Y.) appeared to call for the banning of all military-style semi-automatic firearms on March 21, after she praised New Zealand’s brand new gun control measures, including asking citizens to hand over their weapons, to be “eventually destroyed.”

Ocasio-Cortez suggested that gun control measures in New Zealand should be implemented in the United States.

“This is what leadership looks like,” Ocasio-Cortez wrote on Twitter, referring to a video of liberal New Zealand Prime Minister Jacinda Ardern announcing the new laws.

“Sandy Hook happened 6 years ago and we can’t even get the Senate to hold a vote on universal background checks w/ #HR8. Christchurch happened, and within days New Zealand acted to get weapons of war out of the consumer market.”

Sandy Hook happened 6 years ago and we can’t even get the Senate to hold a vote on universal background checks w/ #HR8.

Christchurch happened, and within days New Zealand acted to get weapons of war out of the consumer market.

Ardern, in her speech, specifically called for the confiscation of firearms from law-abiding New Zealand citizens. According to the New Zealand Police, the new order will bring two additional groups of semi-automatic firearms within the definition of a Military Style semi-automatic (MSSA) firearm, as of March 21.

Arden ordered all citizens with these weapons to fill out a form on the police department’s website.

“In the next 48 hours, a form will be available on this site that we are asking these gun owners to complete, identifying what banned guns they hold,” Arden said. “The police will then arrange for these weapons to be handed over, and eventually destroyed.”

You know, instead of training children, teachers, houses of faith, & concertgoers to prep for being shot, we could just:

The congresswoman’s call to “Mandate safe storage”—meaning storing a disassembled gun and with a trigger lock—has been ruled unconstitutional by the Heller decision. In its landmark 2008 District of Columbia v. Heller ruling, the Supreme Court held for the first time that the Second Amendment guarantees an individual’s right to bear arms for self-defense in the home. In 2010, the court said that ruling applied nationwide.

Those with violent criminal records are already blocked from owning and possessing firearms.

Bump stocks—an attachment used to make semi-automatic rifles fire rapidly like an automatic rifle—will also become illegal in the United States next week, Fox News reported. After the Las Vegas massacre in October of 2017, President Donald Trump expanded the regulatory definition of “machinegun” to include bump-stocks, subjecting them to the restrictions imposed by the National Firearms Act of 1934 and the Gun Control Act of 1968.

Last week Ocasio-Cortez questioned the “thoughts and prayers” commonly used to offer comfort to victims of terrorism in her response to New Zealand’s mass shooting where 49 people were killed.

Video footage widely circulated on social media, apparently taken by the gunman and livestreamed as the attack unfolded, showed him driving to a mosque, entering it, and shooting randomly at people inside. Authorities said an additional 48 people were being treated for gunshot wounds, including young children.

The alleged mastermind of the shooting described himself as an “eco-fascist” in his writings. “I was a communist, then an anarchist and finally a libertarian before becoming an eco-fascist,” he wrote, according to reports of his manifesto.

Ocasio-Cortez was quick to belittle the power of prayer in her initial reaction to the shooting—the worst ever mass killing in New Zealand and the worst mass shooting since 1990.

“At 1st I thought of saying, ‘Imagine being told your house of faith isn’t safe anymore.’ But I couldn’t say ‘imagine’ Because of Charleston. Pittsburgh. Sutherland Springs.” she wrote on Twitter. “What good are your thoughts & prayers when they don’t even keep the pews safe?”

In a follow-up post in her thread, Ocasio-Cortez attempted to clarify her comments, stating that the “Thoughts and prayers” she mentioned was a reference to the National Rifle Association (NRA) using the phrase to “deflect conversation” from policy change. She also clarified that it was not a jab at Prime Minister Jacinda Ardern, who she had linked to in her post.

The congresswoman’s response drew condemnation from some who called her comments insensitive in the aftermath of the brutal shooting.

“This is incredibly insensitive to my Muslim brothers and sisters who were slain in cold blood while they were literally praying because they want to be closer to their creator and they want to become better people,” the Washington Examiner’s Siraj Hashmi wrote.

“If one of your first 1000 thoughts after a horrific mass shooting is to go dunk on a person, a religious belief or an organization on Twitter, you should delete your account,” author Tim Young said on Twitter.