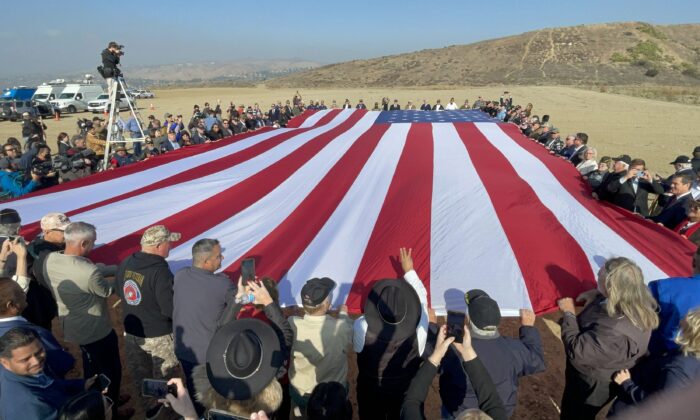 Orange County Supervisors voted this week to ask California’s Department of Veterans Affairs and the state to begin a feasibility study to build a veterans cemetery at Gypsum Canyon in Anaheim Hills.

Gov. Gavin Newsom has yet to sign Assembly Bill 1595, a measure passed by the Legislature that requires the veterans’ department to acquire, study, design, develop, construct, and equip a state-owned and state-operated Southern California Veterans Cemetery in Orange County.

In anticipation of the governor’s signature, county supervisors voted Sept. 13 to formally ask the state to begin the study for the Gypsum Canyon site. The move signals supervisors fully support building the cemetery in Anaheim Hills, Supervisor Don Wagner told The Epoch Times.

“It will have a good impact in setting the tone that this board remains fully involved and interested in this happening quickly,” Wagner said.

The legislation is expected to speed up the process for local veterans and their families who have waited nearly a decade for a local resting place for veterans.

“I’ve heard from a lot of veterans and a lot of veterans’ families who are absolutely unanimous in how important this is to them,” Wagner said. “So I think it means a lot symbolically because we’ve got a large number of veterans in the county and we’re saying to them, thank you for your service.”

The site would also mean veterans’ families will be able to bury their loved ones nearby instead of hours away at national cemeteries in Riverside or Los Angeles.

Once the Gypsum Canyon study is complete, Wagner expects the Anaheim Hills cemetery could open for burials by the end of 2024 or in early 2025, he said.

Every city in Orange County, including the Irvine City Council, has formally backed building a future veterans cemetery at the Gypsum Canyon location, as opposed to the former Marine Corps Air Station El Toro in Irvine.

Irvine’s support is especially notable because the city, dating back as far as 2014, had backed the El Toro site, which has already undergone a full state study.

But local leaders last year tossed aside the Irvine plans in favor of the Anaheim Hills location. However, unlike the Irvine site, the Anaheim location has not yet been studied.

Opposition from neighbors of the El Toro site and interest from housing developers prompted the current Irvine City Council to endorse Gypsum Canyon in Anaheim Hills, where officials held what they called a groundbreaking in December.

Wagner said Orange County leaders and veterans are behind the Anaheim Hills location.

“The Irvine City Council has made it clear that they support Gypsum Canyon,” Wagner said. “Every city in this county has passed a resolution saying they’re in support of Gypsum Canyon, so whatever pull there is for Irvine at this point, it’s pretty much over.”

However, Irvine Councilman Larry Agran, who spearheaded an effort in 2014 to win Irvine’s approval of the El Toro plan, told The Epoch Times in August he is still confident the Irvine site will be selected.

“I’m quite confident that the study [to be funded by the legislation] will reveal that the [Irvine] site is the superior site, and having been approved by the voters of the City of Irvine, will, in the end, be the location for the state-funded veterans’ memorial park and cemetery,” Agran said.

Agran expects the study will show the Anaheim Hills location is much more costly and difficult to develop and could be prohibited legally from development by deed restrictions.

A local effort is underway to elect new Irvine city councilors in November who support the El Toro site, he said.