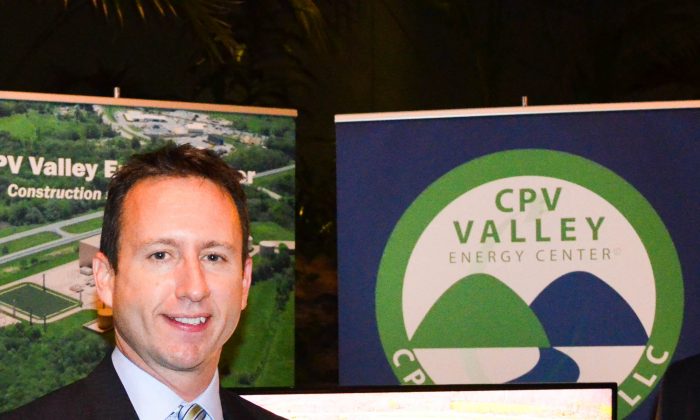 The festivities were interrupted by a loud shouting from actor James Cromwell, of “Babe” and “LA Confidential” fame, when Steve Remillard, vice president of development for CPV, began his acceptance speech.

CPV’s energy center will provide the kind of high tech jobs that encourage young people to stay in the county.

Cromwell began to revile the company which has begun construction of its facility in the Town of Wawayanda. CPV expects to be operational in December of 2017. As Remillard continued to speak, Cromwell was forcibly ejected by guards with an arm behind his back.

Another female activist took up the protest, shouting and screaming, and was ejected more gently by two security guards who led her walking backwards out the door.

Remillard finished his acceptance remarks with generous statements of thanks.

The Alliance for Balanced Growth gave the Golden Shovel Award to CPV “for strengthening its commitment to economic diversity in Orange County and for having the vision and perseverance to make it happen,” according to the award video.

CPV Valley Energy was honored for investing $900 million to construct a 127,000 square foot, 650 megawatt electric generating facility in the Town of Wawayanda. The Alliance for Balanced Economic Growth said CPV’s energy center will provide the kind of high tech jobs that encourage young people to stay in the county. The construction phase will provide over 800 construction jobs.

The total economic impact on the region will be an injection of more than $2 billion, according to the award video, that will continue for the next 20 years. An additional $41 million in annual tax revenue will be funneled into the county, town, and school district.

Remillard said the project was going well. “It was a long development cycle.” Local protests in the summer pointed to the use of fracked gas piped in from Pennsylvania. The company did extensive outreach to explain this to the local community that it has no control over the source of the natural gas used at the plant. The company also says gas will be cleaned before it is used in the Wawayanda plant. “It has to be of a consistent quality before it can be injected into the main pipeline.”

Chairman of the Partnership’s board, Dominic Cordisco, said the message of “one team, one dream” signified the cooperation of everyone is making the year one to remember. Partnership President Maureen Halahan called 2015 a “breakout year” that broke all records for economic development.

Halahan said people only need “to drive around the county to see shovels in the ground, projects in construction, and you working on all those projects.” The Partnership closed 113 percent more projects than in 2012. New companies filled 171 percent more space than in 2014 and created 84 percent more jobs than last year. Including CPV, the incremental economic growth rose to $1.2 billion.

She said the county is gaining a reputation as a major tourist destination, citing Angry Orchard, the multi-million dollar expansion of Woodbury Common, the air show at Stewart Airport, and the open secret of an upcoming Legoland.

The county’s Industrial Development Agency got incentives for 30 percent of the projects that were closed. She called it “arguably the most successful in the state of New York.”

The event was attended by Middletown’s Director of Community and Economic Development Maria Bruni. Bruni said the event is great opportunity to network, meet new people, and “enjoy each other’s company.” She praised the work of the Partnership—”They have helped us out with a lot of projects.”

County Executive Steven Neuhaus touted achievements of the county and expressed gratitude to the Partnership and others for a job well done. “I thank everybody for supporting economic development and I’m proud to be your county executive.”

Others in the mix doing some networking were Touro College of Osteopathic Medicine’s Dean of Students Jerry Cammarata and WTBQ owner Frank Truatt. State senators William Larkin and John Bonacic, whose district has CPV, worked the crowd as did state Assemblyman James Scoufis and several county legislators.

CPV has an office in Massachusetts with main headquarters in Silver Spring MD. CPV’s partner in the project is Diamond Generating out of the West Coast. Remillard says the four and a half year vetting process had over 100 public meetings to air concerns.