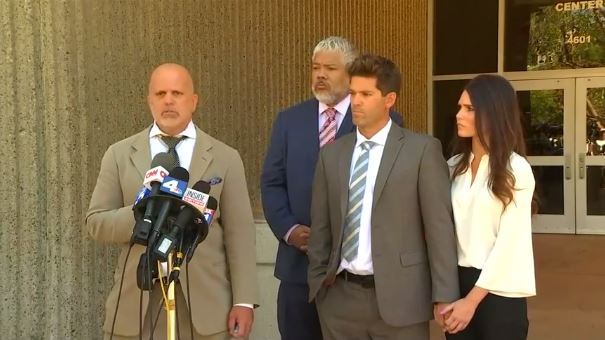 NEWPORT BEACH, Calif. (CNS)—A judge refused on June 5 to dismiss charges against a Newport Beach surgeon and his girlfriend, who are accused of drugging and sexually assaulting multiple women, and set a hearing for June 12 to consider whether the District Attorney’s Office should be kicked off the case.

Jones added that it was his “obligation to ensure integrity of all prosecutions,” but that no one has filed a motion to recuse the District Attorney, which is seeking dismissal of the case against Dr. Grant Robicheaux, 39, and Cerissa Riley, 32.

If the DA’s Office is recused, then the case would be assigned to the state Attorney General’s Office, which could keep the case or assign it to a special prosecutor.

“This is a great day for victims of crimes,” said attorney Michael Fell, who represents one of the alleged victims in the case. “It shows that … victims are able to have their voices heard.”

Defense attorney Philip Cohen demanded a preliminary hearing—a proceeding in which a judge determines whether there is enough evidence to proceed to trial. But Jones noted that the defense has waived its right to a speedy preliminary hearing multiple times in the case, so the standard now is to schedule it in a “reasonable time” period, not within 60 days of charges being filed.

Jones issued a sharply critical ruling of District Attorney Todd Spitzer, saying his move to dismiss the charges put the judge “in the unusual and challenging position” of having to make a decision “without hearing any testimony.”

Jones also criticized Spitzer’s predecessor, Tony Rackauckas, who filed the charges before being voted out of office.

“The political aspirations of district attorneys, past and present, and their thirst for media attention, have created a minefield of legal hazards in this case,” Jones wrote.

Jones noted in his ruling that the current and former district attorneys had dueling news conferences on the case leading up to the election. And he pointed out that Spitzer handed out a copy of a search warrant in the case to reporters, “vouching for the accuracy and truth of the allegations summarized in these Newport Beach police reports.”

“He now has reversed field and disavowed these reports. The reasons given for this turnabout are unclear,” Jones added.

Jones also questioned Spitzer’s decision to assign new prosecutors to conduct a complete review of the case that “he had overseen for nearly a year,” which the judge said was “both unusual and curious.”

Jones said he found it “significant” that Spitzer did not tell the Attorney General’s Office of the issues he felt he faced in proving the case when he previously asked the state to consider taking over the case.

The judge also ridiculed Spitzer’s “ludicrous” claim that Rackauckas “manufactured” the case to his political benefit. Jones said it “frankly raises significant concerns about his motivation in filing this motion to dismiss.”

Jones faulted defense attorneys as well, saying their brief “primarily addresses the missteps of the Rackauckas administration. The people’s motion to dismiss is based upon evidentiary weakness, not prosecutorial misconduct. This court is required to rule on the people’s motion, not on an unfiled government misconduct motion.”

The judge was unconvinced by prosecutors’ arguments that “rogue” investigator Jennifer Kearns, who was fired, filed “misleading and incomplete” reports in the case, or that she “deceived, misled, and persuaded [victims] to slant their narratives.”

Jones said the issues with Kearns refers to the five alleged victims who were added to the case, and that in the case of the two initial women, “these are the charges that Mr. Spitzer embraced, and weaponized, against Rackauckas in his election campaign, only to now disavow.”

“The public has heard from the politicians. The public has never heard from the alleged victims,” he wrote. “Any objective analysis of this case leads to the conclusion that these charges should be put before a jury. A back room dismissal by prosecutors without the alleged victims ever having the opportunity to be heard is contrary to the core values of our legal process, and the interests of the public.”

Spitzer issued a statement, saying his office has “represented to the court on multiple occasions that we do not have the evidence to prove this case beyond a reasonable doubt, and therefore we cannot legally, ethically and morally proceed with the prosecution of this case.”

“These women have endured shocking abuses of their rights,” he said. “As they participated in this process, the district attorney has treated them horribly. Today the court set that right. We are grateful for the court’s compassion to these victims.”

In their brief seeking dismissal of the case, prosecutors said they were “acutely aware of the gravity of this request and the pain it may cause the alleged victims.” But they argued “the evidence in this case falls short of the level needed to meet the people’s constitutionally required burden of proof of each and every element of the crimes beyond a reasonable doubt.”

Prosecutors say in the brief that the defendants “engaged in a swinger lifestyle and openly pursued scores of women for consensual sexual encounters.”

It’s a sharp contrast from when charges were filed in the case, as the two were characterized by the prosecution as alleged sexual predators who used their good looks to lure unsuspecting women before drugging and raping the victims in the doctor’s Newport Beach home.

Prosecutors now say that some of the alleged victims have told investigators at times that they had consensual sex with the two. One alleged victim has a “history of manufacturing events and a documented instance of giving false information,” prosecutors said.

Another snorted about 15 lines of cocaine that she was aware was “laced with ketamine” before waking up to a nude Robicheaux “spooning her,” prosecutors allege. She refused to undergo a sexual assault exam, prosecutors said.

Spitzer initially backed prosecutors on the case after he was sworn in, but grew more concerned as evidence came out of civil litigation in which an alleged victim is suing the doctor and his girlfriend.

Spitzer contends that Rackauckas and his former chief of staff used the case for publicity during his re-election bid, prompting the DA to ask the Attorney General’s Office to consider taking over the case as he felt it had become too politicized in his office.

The Attorney General’s Office said any conflict was cured by Spitzer’s election and declined to take over the case.

Murphy accused Spitzer of continuing to make “critical decisions colored by raw personal animus and naked political calculation” in his legal brief opposing the dismissal of charges. He argued that there is enough evidence to continue forward with the case, including the amount of Gamma Hydroxybutyrate, the date-rape drug, found in Robicheaux’s home. Police recovered 119 grams of GHB, Murphy said.

Murphy also blasted Philip Cohen, one of the defense attorneys, for courtroom hyperbole. He accused Cohen of mischaracterizing the GHB evidence, and of badgering one alleged victim and her family to the point of making a false gas leak report to “smoke the occupants out of the home” and serve the victim in the civil case.

“This harassment continues to this day,” Murphy said.