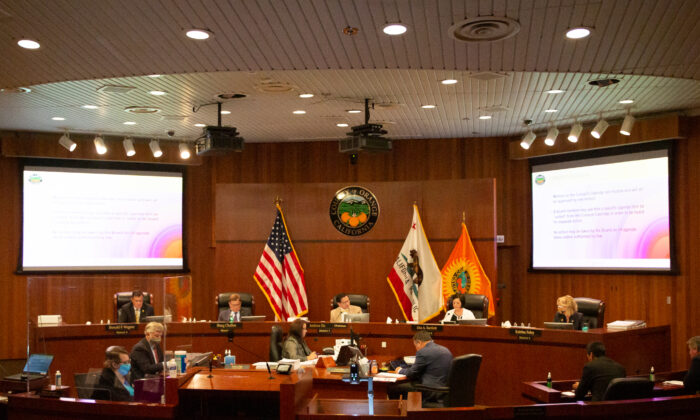 The Orange County Board of Supervisors listens to Orange County residents at a meeting in Santa Ana, Calif., on Aug. 10, 2021. (John Fredricks/The Epoch Times)
Southern California

The Orange County Board of Supervisors made a final decision on how supervisorial districts will be laid out for the next decade, during a special meeting on Nov. 22.

The board originally started the process using maps submitted by the public, which after weeks of meetings and discussion were revised into two main maps, 4C-1, created by Chairman Andrew Do, and 5A-1, created by Vice Chairman Doug Chaffee.

In a 3–2 vote, board members chose map 5A-1, with Chairman Do and Supervisor Don Wagner being the two dissenting votes after claiming 4C-1 was the more equitable map in terms of partisan voting lines.

“The 5A-1 map really addresses a balanced approach to creating districts that work for everyone, and there’s no map that’s going to make everyone 100 percent happy,” Bartlett said. It’s kind of impossible to do that for a whole host of reasons.

“But we really want to hone in on not only being compliant with the Voting Rights Act, and the majority-minority districts and Asian influence communities, but also the city input, looking where all the projects are and the continuity and cities working together within a supervisorial district.”

During the process of determining the new districts, Foley accused Do of politically targeting her by putting Costa Mesa (a city in Foley’s District 2) inside District 1—per map 4C-1—which is not up for reelection until 2024, meaning when her term ends in 2022, she would not be able to be elected again for two years—which Do claims is preposterous.

“We strove to achieve the most balance, and I believe 4C-1 is the most balanced. In fact, I would say, people from my party may even chastise me for coming up with a map that is so balanced, that it actually hurts us,” Do said.

“I don’t want people to think that somehow there is one map that has a moral superiority to another. Because guess what, through this process, I have been made to feel that somehow my thought process is distorted because of politics, when in reality, it is the opposite.”

In the map chosen, Foley will now represent a majority of Latino voters, with the heart of the new District 2 being Santa Ana and the surrounding cities of Garden Grove, Tustin, and others.

“I feel iced out with these maps,” Foley said. “Of course, the lesser of the two is what I’ll be voting for, but it is unfortunate that while I would love to serve the communities that District 2 will become, and I think I’ll do a great job, that’s not who elected me, and those aren’t the areas where I’m working on initiatives and projects, and that’s just not where I ran.”

During the public comment period, commenters were overwhelmingly in support of 5A-1, though Wagner claimed there was an email sent out by the Newport Beach Women’s Democratic Club urging supporters to speak at the meeting in support of 5A-1.

“The Republican Women apparently didn’t do that because we didn’t hear from them,” Wagner said while explaining that the new districts are not supposed to be drawn in a way that affects elections.

Going forward, a public hearing will be held on Dec. 7 for a redistricting ordinance approving the map, with Dec. 15 being the statutory deadline for the board to approve the ordinance for the following June 7, 2022, primary election.