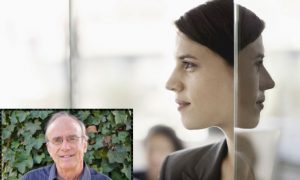 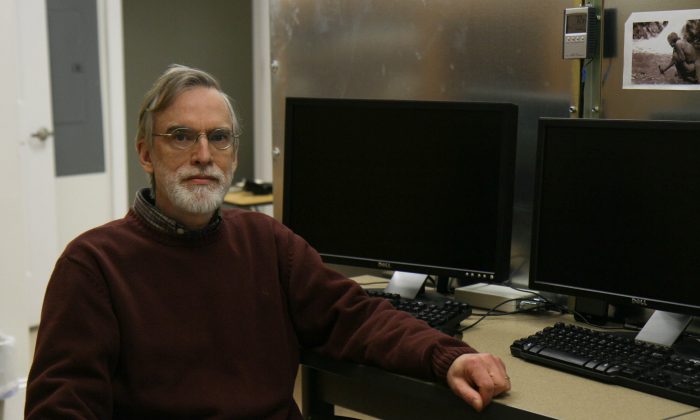 Dr. W.J. Ross Dunseath in his lab at the University of Virginia's Division of Perceptual Studies on Feb. 6, 2015. (Tara MacIsaac/Epoch Times)
Beyond Science

CHARLOTTESVILLE, Va.—Exuding mysterious and strange forces from one’s mind to bend a spoon or otherwise affect a physical object has long seemed to many a rather unscientific pastime. But in a state-of-the-art lab at the University of Virginia’s Division of Perceptual Studies (DOPS), psychokinesis isn’t a sensationalized magic-show talent. Its subtle forms are studied and scientifically measured in various ways.

Dr. Ross Dunseath, an electrical engineer, has made advances in fine tuning novel sensors that can pick up on psychokinetic forces. His instruments are also able to measure physiological changes in people performing psychokinesis tasks. His research partner, Dr. Ed Kelly, a Yale- and Harvard-educated psychologist and neuroscientist, has studied psi phenomena since the 1970s (Psi refers to any psychic phenomenon, such as psychokinesis, telepathy, or clairvoyance).

Identifying the physiological changes associated with psi could really help bring psi research into the mainstream.

Identifying the physiological changes associated with psi could really help bring psi research into the mainstream, Kelly explained. “Showing that a psi event is connected to some other thing is good, because that anchors it. It’s not just a free-floating anomaly, it’s something related to something else. And if the ‘something else’ is physiological, in the contemporary frame of mind, that’s particularly good.”

This could resolve a lot of the issues most often brought up by critics of psi research. For example, the physiological research could give greater control in the lab. If certain biological characteristics or states are identified as correlating with psychokinetic powers, those states or characteristics could perhaps be induced in subjects. This way, psychokinesis could take place on demand in a controlled manner.

More than half the battle for Dunseath and Kelly is finding subjects who have psychokinetic abilities. And their nearly impossible task is finding such subjects who can use these abilities on demand. Furthermore, the person must be able to do so under conditions that work with the given measurement tools. A subject must remain relatively still while his brain activity is being measured using an electroencephalogram (EEG) or a magnetic resonance imaging (MRI) machine.

One subject Dunseath and Kelly studied was able to enter a sort of ecstatic state on demand. But testing him in an MRI machine or with an EEG was difficult, as he moved around quite a bit in this state. Nonetheless, the researchers were able to pinpoint with some certainty parts of the brain activated in this altered state of consciousness and found that they correspond to some physiological effects found in advanced meditators.

While Kelly and Dunseath have witnessed impressive psi events in the past, they have yet to hit on a really outstanding test subject on whom to use their new equipment. Some minor successes provide hope that in the future, when someone with outstanding psi abilities enters their lab, they will be able to measure what’s happening during psi events in a way no one has before.

An example of such success concerns the little blasts of charge detected by Dunseath’s new sensors. Crystals attached to an amplifier act as a charge detector. Sometimes little blips are recorded by the device when no one is around, but blasts of charge appear more often when someone is there trying to make it happen. These are recorded in correspondence with EEG readings.

It’s a start, and the researchers are confident these little starts could pan out into big results. “Come back in a year,” Kelly said. He’s hoping to bring one of his most promising subjects back to the lab for tests. In the early 1970s, Kelly had the opportunity to work with Bill Delmore, a Yale law student at the time.

In his book “Parapsychology, Philosophy, and Spirituality: A Postmodern Exploration,” David Ray Griffin described Delmore’s success in tests of psychic ability involving playing cards: “In a total of 46 runs (of 52 guesses each), Delmore had exact hits (correctly naming both the suit and the denomination) 6 percent of the time (compared with the less than 2 percent that would be expected by chance). The odds against this occurring by chance are a million trillion trillion to one. Especially remarkable was Delmore’s success on ‘confidence calls,’ which are those in which he was most confident that he was correct. On these, he was indeed correct 14 out of 20 times.”

Delmore is now a retired lawyer and Kelly is still in touch with him. Reading the brain activity of such a reliable subject could yield great insights.

The ability to pinpoint physiological changes related to psi could also give researchers statistical control. Kelly said, “Suppose it’s an ESP [extra-sensory perception] test, for example, and we can figure out what EEGs go with hits. Well, then you have a kind of statistical control. You could go into a body of data without ever looking at the ESP part and pick out trials that have the right physiological signature with the expectation that there’s going to be a higher hit-rate in those trials than in the experiment as a whole.”

From Conflict to Compromise

The scientific community has often showed a division in its approach to psi. On one side are the dualists, who say the mind and brain are totally separate. On the other side are the physicalists who say the mind does not exist beyond the brain. Dunseath and Kelly provide a middle ground. Their work doesn’t require a commitment to either perspective.

“I think everybody would agree that at some stage mind and brain are very intimately connected. So there ought to be some reflection in physiology of things that are going on mentally,” Kelly said. He and Dunseath study this intimate connection. Kelly also described his approach to the massive anthropological literature on psi in a paper titled “A Psychobiological Framework for Psi Research,” written in 1983: “What we wanted to focus on particularly was not so much the evidence that psi had occurred (which we assumed would in many or most of these cases be defective from a modern point of view), but rather on the circumstances under which it was believed to have occurred. When one does this it quickly becomes overwhelmingly clear that the strong outbursts of psi are heavily concentrated in a relatively small variety of individuals and circumstances.”

Dunseath opened the bulky door of the electromagnetically and acoustically shielded chamber in his lab.

Because of the shielding, if a subject sitting in that room is able to pick up on what another subject in another room is thinking, the researchers can be sure he did not receive that information via normal means (such as a text message, since no communication signals could penetrate).

The old armchair in the middle of the chamber gives it the feel of grandpa’s den. The chamber is carpeted and the wooden cupboards containing some of the sensor devices were built in a homey style. The idea is to make the subject as comfortable as possible. The subject is given some time to relax before focusing on some of the sensors and trying to influence them psychokinetically.

It’s hard enough to perform a psychokinetic task under any circumstances. But in the lab, additional difficulties are introduced if the environment is cold and sterile. A relaxed inner state is often said to be conducive to psychokinesis. Wearing an EEG cap, the subject is already distracted by the thought of having to keep still so it can work properly, even paying attention to not tensing the forehead.

Tweaking the measurement tools to increase the subject’s comfort and better suit the delicacies of psi research has led to advancements that can be applied beyond this field.

How Psi Research Could Help Other Fields of Study

Dunseath’s improvements on EEG design have broad applications, including for use in epilepsy studies, for example.

“One of the ways in which psi researchers can begin to break down this terrible kind of professional isolation that we’ve suffered under for many years is to begin aggressively making contributions to some of these neighboring research areas.”
— Dr. Ed Kelly, psychologist, neuroscientist

Kelly wrote: “One of the ways in which psi researchers can begin to break down this terrible kind of professional isolation that we’ve suffered under for many years is to begin aggressively making contributions to some of these neighboring research areas. There’s no reason why we can’t do that. In fact, in our group we’ve already made some significant contributions to EEG methodology, and we expect to make more in the future.”

“I don’t distinguish between the hard problems and the easy problems [in neuroscience],” Kelly said. “I don’t think there are any easy problems. Ultimately, to understand any of this, we’re going to have to understand all of it, including the supernormal stuff. We’ll find that it all has a common theoretical underpinning.”

Understanding how the brain works during psi events could give insights into “personality growth and integration, unusual creativity, and striking expansions of various kinds of cognitive abilities, including even such things as reading speed,” according to Kelly.

For him, it isn’t a question of whether psi exists or not, it’s already clear to him that it does. It’s about how psi research can help us further understand our consciousness in a broad sense.

Kelly wrote: “In my opinion, the existence of psi phenomena has been established beyond any reasonable doubt. Some of my colleagues would perhaps find that too strong a statement, but I think that’s because we’ve grown too accustomed to bending over backward to accommodate critics who, by and large, are behaving extremely irresponsibly. The existing literature of the field is very large, and no one is qualified to express a global opinion about the subject who has not taken the trouble to study that literature in some depth. Nevertheless, at the present time we are confronted with the sad and frustrating spectacle of a number of rather distinguished scientists who are freely offering sweepingly negative opinions about the field without having taken that time and trouble.”