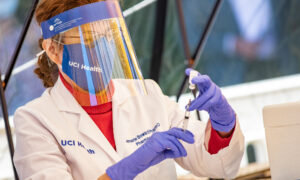 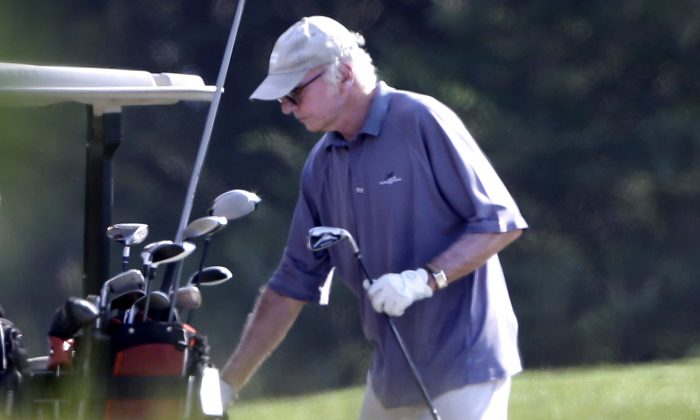 Actor Larry David returns a club to the cart while playing golf with President Barack Obama, not shown, at Farm Neck Golf Club in Oak Bluffs, Mass., on the island of Martha's Vineyard, Saturday, Aug. 17, 2013. (AP Photo/Steven Senne)
US

President Barack Obama has long depended on golf to make him “almost feel normal,” he once told CBS, yet his golf companions have been far from average.

The president wrapped up his vacation at Martha’s Vineyard on Saturday—a much-watched reprieve punctuated by some work-related matters, such as briefings and a statement on the turmoil in Egypt. He spent his last day on the green with comedian Larry David, former U.S. trade representative Ron Kirk, and co-owner of the Boston Celtics Glenn Hutchins.

David, “Curb Your Enthusiasm” star and “Seinfeld” co-creator and writer, first met Obama at Martha’s Vineyard in 2004. “I liked him from the first moment, even though he’s a skinny man…not presidential in a bathing suit. And I decided to support him when I first heard him speak at the Democratic Convention,” David told the Huffington Post in 2008. He had spoken to students at Dartmouth College in New Hampshire, encouraging them to vote for Obama.

Last year, David jokingly summed up Obama’s leadership on Jon Stewart’s “Daily Show”: “It could have been worse.”

Obama’s more than 100 rounds of golf as president have included outings with White House staff and officials, but also with professional golfers.

In February, he played with Tiger Woods at a golf and yacht club in Jupiter, Florida.

“Playing with Mr. President was pretty cool,” Woods told the Chicago Tribune. ”He’s just a wonderful person to be around. We won.”

“He’s got amazing touch. He can certainly chip and putt,” Woods said. “He’s a pretty good athlete, and as we all know he played a lot of hoops.”

During his vacation this past week, Obama also ducked into a court on a rainy day to play some basketball.

Obama has shown modesty in describing his own golf skills, though he’s played with the pros.

As CBS pointed out last year when Obama played his 100th round of golf as president, the presidential golf game is often under scrutiny for more than the skill displayed.

CBS reporter Mark Knoller summed it up: “It infuriates critics who demand to know why he’s not working on the nation’s problems. It makes his supporters aggressively defensive about his right to have a few hours of recreation.”

Obama told CBS’s Harry Smith in an earlier interview: “It’s the only time that for six hours, I’m outside. … It feels as if…you’re out of the container.”