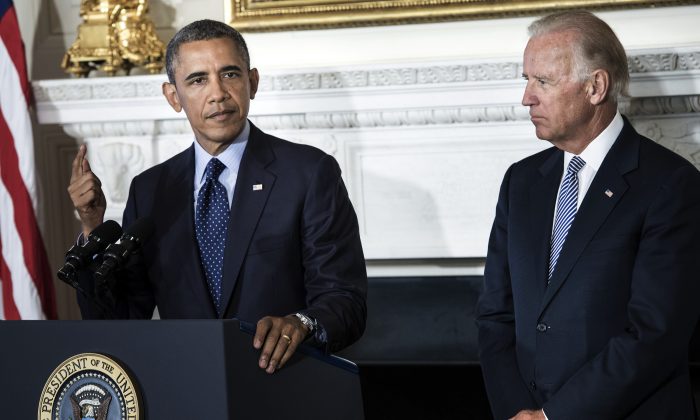 Vice President Joseph R. Biden (R) listens while U.S. President Barack Obama speaks about increasing government efficiency. President Obama has a lot on his agenda including foreign policy issues, like Egypt and Syria, the economy, and immigration reform, but government reform management, is one issue that is unlikely to receive much coverage. (Brendan Smialowski/AFP/Getty Images)
Politics

WASHINGTON—President Obama has a lot on his agenda including foreign policy issues, like Egypt and Syria, the economy, and immigration reform, but government reform management, is one issue that is unlikely to receive much coverage.

“It is the biggest issue in Washington that isn’t getting any attention,” said Dr. John Hudak, political analyst with the Brookings Institution.

The changes, which Obama has been pursuing throughout his first term, involve two main areas: innovation through technology and streamlining government. The two combined will do what most Republicans, and particularly Tea Party members, say they support, said Hudak: reduce the size of government, lower deficits, cut spending, and improve efficiency.

The changes will also appeal to Democrats in that they have the potential to transform the way citizens relate to their government. But “nobody has any interest in covering it,” Hudak said.

Returning after two overseas trips to Europe and Africa, the president met with his second term Cabinet Monday morning, directing it to build on initiatives begun during his first term.

Following the Cabinet meeting, Obama outlined some of those initiatives and noted new ones to come.

“We found ways to deliver the services that citizens expect in smarter, faster, and better ways,” he said, speaking in the State Dining Room at the White House. He cited the Federal Emergency Management Agency’s (FEMA) use of satellite data and aerial imagery to identify emergency help rather than the longer door-to-door assessment as an example. After Hurricane Sandy, FEMA agents used iPads and mobile apps to help people register for disaster relief on the spot rather than having to leave their homes.

Reducing waste and thus cost was also key. “For example, just by working to get rid of overlapping IT systems, we’ve identified more than $2.5 billion in savings across the federal government—and that’s just the beginning,” Obama said.

Increasing access to government data through Data.gov was another area of innovation. Now free and more user friendly, more extensive access to data has also created opportunities for entrepreneurs to provide services. For example, one company, iTriage, founded by two emergency room doctors, uses government data on health care providers to help people find the closest doctors and hospitals that meet their needs.

“We’ve made huge swaths of your government more efficient and more transparent, and more accountable than ever before,” Obama said.

Sylvia Mathews Burwell, director of the Office of Management and Budget (OMB), has been appointed to help Cabinet members streamline their departments. Forty “presidential innovation fellows,” technological innovators from the private sector, are also on call to apply their experience to government agencies.

Another project in the pipeline is MyUSA, which would facilitate filling in government forms by imitating online shopping websites that remember an individual’s information to speed up the process. Yet another will allow applicants to track the progress of their applications, while another looks at reducing the size of application forms. In one instance, a form was reduced to 21 pages and then again to just three.

At a press briefing, these initiatives barely raised a mention. White House correspondents were focused on the administration’s position on events in Egypt. The sole question raised was what was new about the initiatives.

White House spokesman Jay Carney said it was important to the president and “exciting stuff,” describing the previous Cabinet meeting as among the most interesting he had attended. He was not, however, surprised at the lack of interest.

“In an ideal world, maybe a world less crowded with news like what’s happened in Egypt or the like, this would get the kind of attention that I think it deserves,” he said.