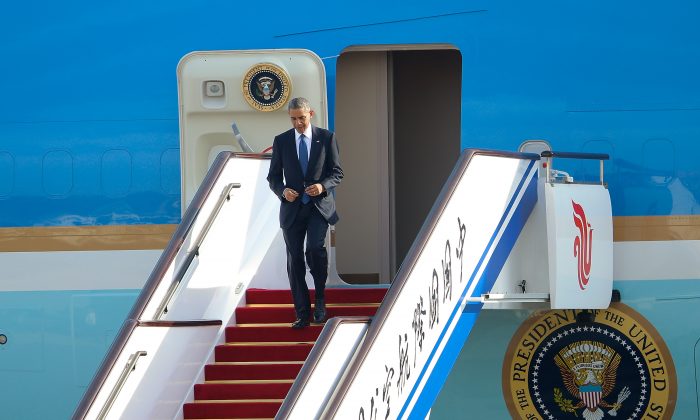 U.S. President Barack Obama arrives at the Beijing Capital International Airport on November 10, 2014 in Beijing, China. The APEC 2014 Summit will bring together leaders and senior administration from 21 countries November 7-11. (Lintao Zhang/Getty Images)
US

WASHINGTON—As President Obama and his team embark to Asia this week, foreign policy experts from Brookings Institution and the Center for Strategic and International Studies (CSIS) have been eager to share their advice.

Suggestions on trade and investments take center stage, but experts are also looking at how the president will address other issues in China: the protests in Hong Kong, the country’s aggressive stance in the East and South China Seas, and cyber hacking and espionage.

The president’s itinerary begins with attending the APEC meeting, Nov. 10-11, hosted by China in a suburb of Beijing, followed by the Asia Pacific Economic Cooperation Leaders Meeting.

While in China, President Obama will have a state visit with Xi Jinping. Much has been discussed of the visit, and the strained relationship between both countries. The two leaders have not had a face-to-face meeting since they met in Sunnylands, California in June 2013.

“As seen over the past year, China and Xi have surprised the United States and China’s neighbors with an assertive foreign policy,” said Douglas H. Paal, from Carnegie Endowment for International Peace, and who was director of the American Institute in Taiwan (2002–2006).

While relations could be worse, Jonathon Pollack, senior fellow at Brookings, said that “neither leader can take much satisfaction from prevailing circumstances.” The Obama administration will seek “to reenergize negotiations of a bilateral investment treaty and meaningful steps on climate change.”

“Next week’s deliberations in Beijing and beyond will provide important hints on what might be possible over the next two years,” Pollack wrote Nov. 4.

Richard Bush III, director of the Center for East Asia Policy Studies at Brookings, advised the president’s team to resolve the Hong Kong standoff between the pro-democracy protesters and Hong Kong authorities. Bush wrote, “The Hong Kong government has hinted that Beijing’s plan might be adjusted to enhance competition and accountability, but the protesters remain to be convinced” that residents will have a genuine choice. He advised that the Americans stress the value to China of an effective democratic system in Hong Kong.

The Obama Administration’s new focus on Asian policy is called the “pivot,” which is an effort to rebalance our trade and defense priorities.

Secretary of State John Kerry emphasized the trade importance at a press conference, Nov. 8, in Beijing. “The United States is very committed to working with our APEC partners in order to build stable regional economic order … Our goal is to remove barriers to trade and investment so that businesses in all APEC economies can grow and create jobs and compete with other companies and other countries on an equal basis.”

David Dollar, from the Brookings Institution, stressed the importance of the TPP for reducing trade and investment barriers. He said, a trade deal is not ready yet, as difficult issues remain, especially regarding Japan’s agricultural interests.

“There is not much that President Obama can do on this trip to address the TPP, but in any group or one-on-one meetings with other TPP leaders, he should push this as the highest priority for advancing Asia-Pacific economic integration,” said Dollar, who was the U.S. Treasury Department’s economic and financial emissary to China from 2009 to 2013.

China is not part of the discussions of the TPP. “Southeast Asia can’t imagine an economic strategy for the United States for Asia that doesn’t include China, so TPP looks a little strange to them,” said Ernest Bower, from CSIS.

White House wants to get “fast track,” or trade promotion authority (TPA), so that negotiations can go forth and the trade package worked out between nations will be considered as a whole, rather than allowing debate on parts of an agreement. Environmental groups and those who have concerns for job loss of American workers take a dim view of fast track for fear that U.S. laws protecting the environment will be compromised and jobs will move overseas.

Reacting to the post-election meeting on Friday between the President and Republican Party leaders, Matthew Goodman, from CSIS, said it looked promising that trade and TPA were one of the few things that they might be able to work together on.

On corruption, Kerry said regarding the APEC partnership, “We are determined to prevent, detect, and effectively prosecute foreign bribery. We’re providing guidance to our businesses on how they could help prevent and detect corruption. And we are enhancing our law enforcement cooperation and we’re promoting the adoption of APEC business codes of ethics for small and medium enterprises.”

In the last year, it might appear that the United States had lost interest in Asia. There is no denying that the administration has been distracted by Syria, ISIS, and Ukraine crises. Schwartz said, “It will be key for the President to demonstrate that we’re focused on our security commitments in Asia.”

Schwartz said there was good reason to not be sanguine on making progress with China on our security. He said the FBI has found that China has not made changes to its aggressive cyber warfare.

“I think one thing that you’ll see out of the East Asia Summit and the U.S.-ASEAN Summit is a growing determination to stand up to China on the maritime security threat that China has very practically posed,” said Bower, who expects to see increased ASEAN cohesiveness behind the South China Sea issues.

Following the Beijing meetings, on Nov. 11-12, Obama travels to Myanmar (also known as Burma) to the East Asia Summit (EAS). In Naypyitaw, he will meet with President Thein Sein. Later in Rangoon on Nov. 14, the President will meet with opposition leader and Nobel Peace Prize winner Daw Aung San Suu Kyi, and participate in a town hall event with members of the Young Southeast Asian Leaders Initiative (YSEALI).

The President will try to convince President Thein Sein to continue the reforms toward making the country a full democracy. He spoke to Thein Sein and Suu Kyi separately on Oct. 30, and “underscored the need for an inclusive and credible process for conducting elections next year,” stated the Associate Press. As the Burmese constitution is currently written, Suu Kyi cannot run for president, and the military is allotted one-third of the seats of the parliament.

“I think the Americans would like to see constitutional changes made before the election so that [Suu Kyi] would be able to run,” said Bower.

G-20
The trip ends with attendance at the G-20 meetings held in Brisbane, Australia on Nov. 15-16. At Brisbane, Obama will deliver a major speech on Asia policy, according to Schwartz.

Goodman said the G-20 is a misnomer and that really it is a G-49, when six invited guests and the European Union countries are added that aren’t already members. How to spur economic growth will be talked about as it has been since the G-20 inception in 2008.

“Right now, global growth is weaker than everybody would like. The U.S. is growing, but not as fast as it might, following a deep recession. And everybody else has growth challenges. Europe is on the brink of a recession, possibly deflation. China is slowing. Japan is still struggling to get onto a faster growth trajectory. So growth is something that everybody in that room at the G-20 is going to be very concerned about,” Goodman said.