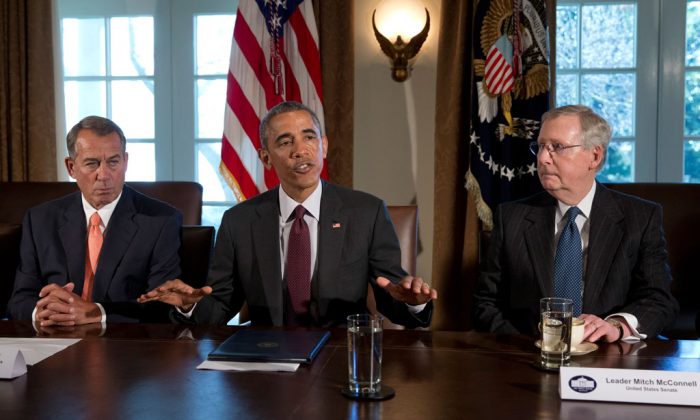 Obama Sits Down With Leaders of New GOP-Run Congress

WASHINGTON—President Barack Obama and Republican congressional leaders paid lip service to the notion of bipartisanship in their first meeting of the year Tuesday, but neither side appeared to give ground on GOP priorities that have been met with a flurry of veto threats from the White House.

As he opened Tuesday’s meeting, Obama urged leaders to stake out areas of compromise on trade, tax reform and cybersecurity, saying he was hopeful that “a spirit of cooperation and putting America first” will prevail. The president was flanked by House Speaker John Boehner and Senate Majority Leader Mitch McConnell, the two Republicans now in charge on Capitol Hill.

Obama’s sunny spin on Washington’s new power dynamic was at odds with much of what has played out in the week since the new Congress was seated. Republicans have taken aim at core elements of the president’s agenda, including legislation on immigration and health care that the White House has vowed to veto.

Boehner appeared to double down on the Republican strategy in Tuesday’s meeting. His office said the Ohio Republican made clear that the House would push forward on a bill that would block the president’s executive actions on immigration and also urged the president to sign a bill approving construction of the Keystone XL pipeline.

The Keystone measure and immigration bill are among the five veto threats the White House has issued in the week since Congress returned to Washington.

White House spokesman Josh Earnest took a sharper tone in discussing Republicans than the president, saying the GOP’s approach to the opening days of the new Congress raises questions “about how serious they are about trying to work with the president.”

“In the first five days that they’ve been in session, they’ve advanced five pieces of legislation all the way to the rules committee that they already know this president strongly opposes,” Earnest said.

Despite the areas of disagreement, the White House and Boehner both raised the prospect of working together on trade, overhauling the nation’s complex tax code, and cybersecurity.

The president renewed his call for Congress to pass legislation encouraging the private sector to share cyberthreat data with the government and shield companies from lawsuits if they opt to do so.

“I think we agreed that this is an area where we can work hard together, get some legislation done and make sure that we are much more effective in protecting the American people from these kinds of cyberattacks,” Obama said.

Boehner’s office concurred, saying “Republicans are ready to work with both parties to address this important issue and put some common-sense measures on the president’s desk.”

Absent from Tuesday’s meeting was Senate Minority Leader Harry Reid, D-Nev., who suffered an injury during a recent workout and has not yet returned to Capitol Hill.

The White House said the president also updated lawmakers on foreign policy issues, including the military campaign against Islamic State militants in Iraq and Syria. Obama has called on Congress to vote on a new authorization for use of military force that would be a guidepost for that effort. Boehner and other Republicans have said they want the White House to write the authorization, then send it to Congress for votes.