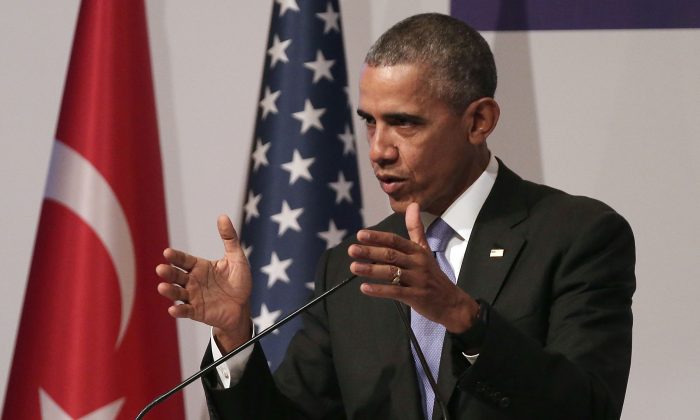 U.S. President Barack Obama dismissed the idea that Muslim refugees should be kept out of America following the terror attacks in Paris.

At least one the attackers has been identified as a native Syrian who posed as a refugee as he traveled from Syria to France, leading many to cast a critical eye on the international response to the situation.

About the idea that the United States should only accept Christians fleeing Syria, Obama said it was “shameful.”

“When I hear folks say that, ‘Well, maybe we should just admit the Christians but not the Muslims,’ when I hear political leaders suggesting that there would be a religious test for which person who’s fleeing from a war-torn country is admitted, when some of those folks themselves come from families who benefited from protection when they were fleeing political persecution, that’s shameful,” Obama said.

Although Obama didn’t name names, he seemed to be referencing Sen. Ted Cruz, a Republican presidential candidate whose father fled Cuba decades ago.

“That’s not American. That’s not who we are. We don’t have religious tests to our compassion,” Obama added at the news conference in Turkey on Nov. 16, reported Reuters.

The remarks came a day after Cruz called for Muslim refugees from Syria to be barred from entering the United States.

“There is no meaningful risk of Christians committing acts of terror. If there were a group of radical Christians pledging to murder anyone who had a different religious view than they, we would have a different national security situation,” Cruz (R-Tex.) told reporters in Myrtle Beach, South Carolina, according to the Washington Post.

“But it is precisely the Obama administration’s unwillingness to recognize that or ask those questions that makes them so unable to fight this enemy. Because they pretend as if there is no religious aspect to this.”

Fellow GOP candidate Jeb Bush, the former Florida Governor, said on Sunday on NBC that there should be a thorough screening of refugees coming into the U.S., and those who make it through should be provided with a safe haven.

“But I do think there is a special important need to make sure that Christians from Syria are being protected because they are being slaughtered in the country and, but for us, who? Who would take care of the number of Christians that right now are completely displaced?” Bush said.

But Obama emphasized he wouldn’t lean that direction.

The terror group ISIS, or the Islamic State, has taken credit for the attacks in Paris that left about 129 dead and hundreds of others wounded. The group is labeled as extremist Muslims.

Obama also defended his strategy against the Islamic State, which involves military support to regional allies and humanitarian aid to affected citizens, while noting he’s unwilling to put a lot of troops on the ground.

“The one exception is that there had been a few who suggested that we should put large numbers of U.S. troops on the ground,” he said,

“And it is not just my view, but the view of my closest military and civilian advisers that that would be a mistake, not because our military could not march into Mosul or Raqqa or Ramadi and temporarily clear out ISIL, but because we would see a repetition of what we’ve seen before, which is if you do not have local populations that are committed to inclusive governance and who are pushing back against ideological extremes, that they resurface unless we’re prepared to have a permanent occupation of these countries.”

Asked repeatedly by reporters why he isn’t changing his strategy after the Paris attacks, Obama became annoyed. “I don’t know what you want me to add,” he said. “There will be an intensification of the strategy we put forward, but the strategy that we are putting forward is the strategy that ultimately is going to work.”