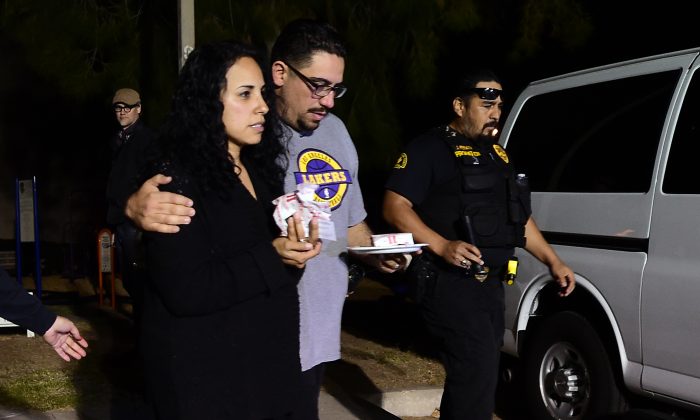 Omar Riopedre embraces his wife Diana, who was in the Inland Regional Center when the mass shootings took place, as they leave the Rudy C. Hernandez Community Center in the San Bernardino on December 2, 2015. (Frederic J. Brown/AFP/Getty Images)
US

U.S. President Barack Obama says that California shooting, which left 14 dead and 17 wounded, may be linked to terrorism but it’s too early to tell.

“At this stage we do not yet know why this terrible event occurred. We do know that the two individuals who were killed were equipped with weapons and appeared to have access to additional weaponry at their homes. But we don’t know why they did it,” Obama said from the Oval Office on December 3.

“And until the FBI’s been able to conduct what will be a large number of interviews, until we understand what the workplace relationship between the individuals and his superiors, because he worked with the organization where this terrible shooting took place, until all the social media and electronic information has been [sorted], we won’t know.”

“We’re going to get to the bottom of this,” he added. “And we’re going to be vigilant as we always are about getting the facts.”

Obama’s comments came as Sen. Ted Cruz, a Republican presidential candidate, told the crowd at a Jewish fundraiser that he’s concerned about the potential link to terrorism.

“At this point, the details of what happened in San Bernardino are still unclear,” the Texas senator said.

“But our prayers are with the families of those who were murdered and those who were shot. And all of us are deeply concerned that this is yet another manifestation of terrorism, radical Islamic terrorism here at home. Coming on the wake of a terror attack in Paris, this horrific murder underscores that we are in a time of war.”

Cruz emphasized the need for a “wartime president” that could handle the ongoing battle with terrorists.

Democratic candidate Hillary Clinton reacted to the shooting on Twitter, saying: “I refuse to accept this as normal. We must take action to stop gun violence now.”

Republican frontrunner Donald Trump sent good luck to law enforcement and noted, “This is when our police are so appreciated!”