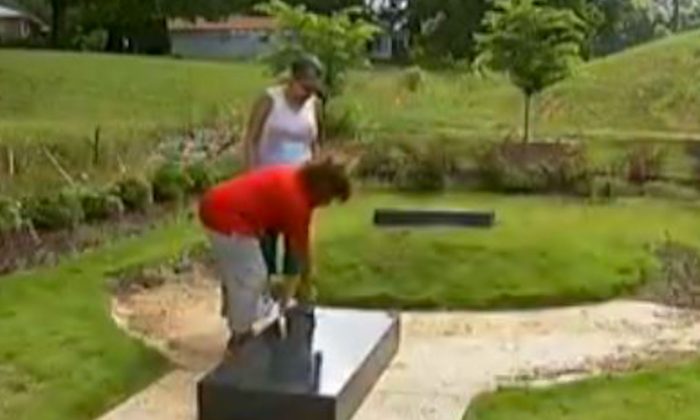 A monument to Michelle Obama's ancestor in Rex, Ga., knocked over. (Screenshot/WSB-TV)
News

Obama monument: A stone monument erected about a year ago in the small town of Rex, Ga., to mark Michelle Obama’s family history—from slavery to political prominence—was knocked over.

Clayton County Commissioner Sonna Singleton told WSB-TV on Monday: “We’re going to believe just the way we showed that unity on that day here in Rex when we had the dedication of this memorial, we’re going to believe that there’s not that kind of hatred or dissension that someone would do this.”

Melvinia Shields was born a slave in California in 1844. At the age of six, she was sent to the Shields farm in present-day Rex, Ga., following her owner’s last will and testament.

The monument reads: “Her family would endure a five-generation journey that began in oppression and would lead her descendant to become first lady of the United States of America Michelle Obama.”

The Civil War in Georgia website outlines Shields’s life, including the birth of four children—three of whom were mulatto—and a quote from the late Ruth Applin who married Sheilds’s grandson: “Mattie McGruder [was] a loving, spiritual woman seen often with her bible and singing hymns.”

Sheilds died at the age of 94 and is buried in Kingston, Ga.

Community members hope to have the monument repaired in time for a planned celebration of the town’s history later this month, according to WSB-TV. Singleton said, “It was our little source of pride because here we are in little old Rex, Georgia, and we had ties to the White House, so there’s pride in us for that.”