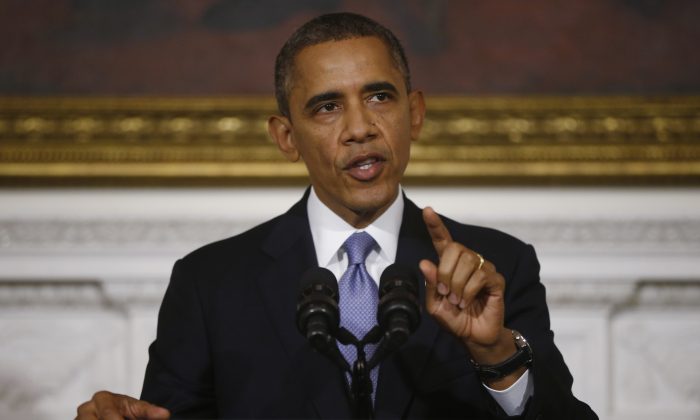 Obama Speaks on Economy After Shutdown, 3 Goals for 2013

In a statement Thursday morning, President Barack Obama quoted a credit rating as a non-partisan evaluation of the nation: “Repeated brinkmanship” is the greatest threat to U.S. economic stability. This in light of the 16-day partial federal government shutdown that ended Thursday and the last-minute deal that prevented the first U.S. debt default in 200 years.

Obama said the “manufactured crises” have “encouraged our enemies … and emboldened our competitors.”

While the exact economic impact of the shutdown is not known, he said, it has certainly caused small business loans to be put on hold; it has caused consumers to cut back on spending; it has delayed hiring at corporations; it has increased the country’s borrowing costs due to the threat of default; it has frustrated Americans.

“The American people are completely fed up with Washington,” he said. “We’ve got yet another self-inflicted crisis that set our economy back.”

The president said America is still the most reliable and safest place to invest. This is what allows Americans to invest in their futures, he said.

“We keep our word, and we meet our obligations.”

Obama set three goals for the remainder of 2013:

1. To take a balanced approach to a responsible, long-term budget. Obama said Senate passed a budget, and the House passed a budget, then they were supposed to come together and make it work. He said forming a budget should not be an “ideological exercise.”

2. Finish the job of fixing the “broken immigration system.”

3. Pass a farm bill. Obama wants to see a bill that gives rural communities security and opportunities to grow, he said. He encouraged Republicans to negotiate on the farm bill currently sitting in the House. He invited Republicans to present their improvements to the bill so it can be debated in a timely manner and passed.

Obama recognized that not all partisan differences will be dissolved. “That’s OK, that’s democracy, that’s how it works,” he said. Republicans and Democrats should debate those differences “passionately and in good faith,” he said, but they should also work well together where they agree and always in the interest of the people.

The president finished his speech by welcoming back the furloughed federal employees. He said the shutdown has perhaps helped Americans realize what an important role government plays in their daily lives.

“Welcome back,” Obama said. “What you do is important. It matters.”