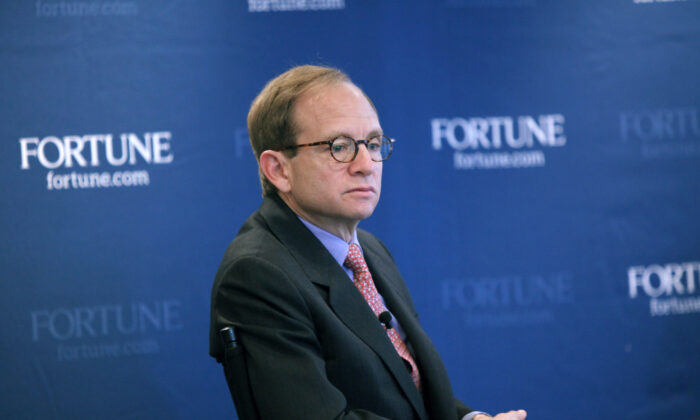 Steven Rattner, head of the Auto Industry Task Force under former President Barack Obama, is the latest Obama-era economic aide to sound the alarm on inflation, asking how the Biden administration could have gotten “this critical issue so wrong,” warning the Build Back Better plan could exacerbate inflationary pressures.

Rattner made the remarks in an op-ed for The New York Times, in which he challenged the “transitory” inflation narrative and urged the White House to “inject some real fiscal discipline into its thinking.”

Inflation, as measured by the consumer price index (CPI), rose 0.9 percent over the month and 6.2 percent over the year in October, with the latter being the fastest pace since 1990. That dovetails with recent government data showing that producer prices rose by 8.6 percent in the 12 months through October, adding to concerns about consumer price inflation as higher production costs tend to trickle down to consumers.

“How could an administration loaded with savvy political and economic hands have gotten this critical issue so wrong?” Rattner wrote, referring to the prevailing position taken by Biden administration officials—and Fed policymakers—that inflationary pressures would be less intense and more short-lived.

“For the Biden administration, which has long insisted that prices would rise far more slowly, inflation is now its biggest challenge,” Rattner wrote, arguing inflation contributed to Democrats’ poor performance in this month’s elections and helped pull down Biden’s approval rating.

The sharp run-up in inflation appears to have caught the Biden administration by surprise, with officials increasingly acknowledging inflationary pressures will stick around longer than previously anticipated, though generally continuing to stand by the “transitory” narrative.

Treasury Secretary Janet Yellen said in late October that she continues to see inflation as a temporary supply side-driven phenomenon that will normalize next year, and that President Joe Biden’s big spending plans will actually have an anti-inflationary effect by smoothing some supply-side dislocations and footing the bill for some costs facing American families.

Biden, too, has taken that line, telling reporters at a press briefing on Nov. 10, the day the Labor Department released data showing inflation running at a 31-year high, that “17 Nobel Prize winners in economics have said that my plan will ‘ease inflationary pressures,’” arguing that the recently passed infrastructure bill would reduce supply-side bottlenecks and “make goods more available and less costly.”

The president was presumably referring to an open letter (pdf) signed by more than a dozen Nobel laureates backing his economic agenda, arguing that “it will ease longer-term inflationary pressures” because “it invests in long-term economic capacity and will enhance the ability of more Americans to participate productively in the economy.”

“By providing affordable child care, affordable elder care, we’re going to help get those people back into the workforce, which will reduce price pressures while also reducing the practical costs that Americans face,” Deese said. “That’s the case we’re going to make and that’s the case why delivering right now for the American people is the right thing to do.”

But Rattner challenged that view, arguing in his op-ed that “the administration should come clean with voters about the impact of its spending plans on inflation.”

“Build Back Better can be deemed ‘paid for’ only if one embraces budget gimmicks, like assuming that some of the most important initiatives will be allowed to expire in just a few years,” he wrote.

“The result: a package that front-loads spending while tax revenues arrive only over a decade. The Committee for a Responsible Federal Budget estimates that the plan would likely add $800 billion or more to the deficit over the next five years, exacerbating inflationary pressures,” he added.

The Committee for a Responsible Federal Budget estimates that, as written, the Build Back Better act would raise deficits by $800 billion over the first five years and reduce them by $600 billion in the following five years, for a total deficit increase of $200 billion through 2031. But if the legislation were made permanent and no additional offsets were imposed, the committee estimates the plan would increase deficits by $3 trillion over the next 10 years.

A separate analysis from the Wharton School of the University of Pennsylvania estimated that Biden’s Build Back Better framework would increase spending by $1.87 trillion over the 10-year budget window while raising revenues by $1.56 trillion, adding over $300 billion to the federal debt.

“The White House needs to inject some real fiscal discipline into its thinking,” Rattner wrote, arguing that the right move would be to raise taxes to pay for Biden’s spending initiatives.

Republicans, who oppose the Build Back Better agenda, warn it could fuel further price hikes.

“Inflation is at a 30-year high, yet the Biden administration and Congressional Democrats want to blow past all the warning signs and pour trillions more into government programs,” Sen. John Boozman (R-Ark.) said on Twitter.

“Our economy, and American families, will continue to suffer under this reckless tax-and-spend agenda,” Boozman wrote. “Build Back Better will make inflation worse.”