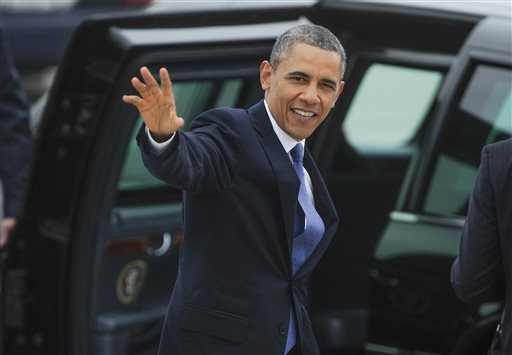 President Barack Obama waves to a crowd gathered at Hartsfield-Jackson International Airport on his way to give the commencement speech at Morehouse College, Sunday, May 19, 2013, in Atlanta. (AP Photo/John Amis)
12- OBSOLETE

Obama Approval Rating: According to a poll released Sunday, U.S. President Barack Obama has a 53 percent approval rating, showing not much change following a week of controversy.

The CNN/ORC poll reflects the opinions of 923 American adults telephoned May 17–18. The 53 percent approval rating is a slight improvement on the 51 percent tallied in a similar survey April 5–7; CNN/ORC polls have shown Obama’s approval rating to fluctuate between 47–55 percent over the past year, usually remaining above 50.

In Sunday’s poll, 45 percent of respondents said they disapprove of the way Obama is handling his responsibilities. That’s less than the 47 percent who disapproved, according to the April poll. The disapproval rate has fluctuated between 43–50 percent over the past year, usually remaining below 48.

Last week, the president was under fire when it was revealed that the Internal Revenue Service (IRS) had been unfairly targeting tea party groups, and that the Department of Justice had potentially violated press freedom rights with methods used to tap phones at the Associated Press.

Obama decried the IRS actions, and said he and his administration did not know about an investigation into tea party targeting until a few weeks ago. Obama said in a press conference broadcast on the White House website on May 13 that the IRS must remain bipartisan. As to any partisan IRS actions, “I’ve got no patience with it, and I will not tolerate it,” he said.

White House spokesman Jay Carney told reporters that he could not comment on the AP phone taps because they are related to an on-going investigation in which the White House is not directly involved.

The Obama administration was also under continued scrutiny last week concerning how it handled the attack on the U.S. Consulate in Benghazi, Libya, last year. Emails sent by the administration that included talking points for officials following the attack were criticized as trying to downplay the terrorist nature of the attack.

Obama said his administration released information about the terrorist attack three days later, and it would not make sense to stage a coverup for only three days. He said the criticisms, part of a political agenda, are a “sideshow.”

Fox New’s Chris Wallace asked Pfieffer, “How can people have confidence in the president’s programs when so often … he seems to be a bystander to the problems in his own administration?”

Pfeiffer responded: “The cardinal rule is, you don’t get involved in independent investigations, and you don’t give the appearance of doing so.”

He said the president handled these cases correctly by staying out of independent investigations, but quickly addressing the nation when problems came up and taking action—by responding swiftly.