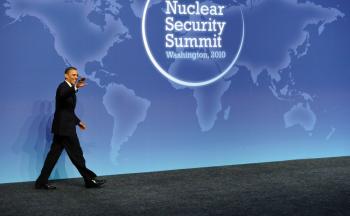 President Barack Obama arrives to greet heads of delegation for dinner during the Nuclear Security Summit at the Washington Convention Center in Washington, DC, April 12, 2010. (Eric Feferberg/AFP/Getty Images)
US

The two discussed the problem of Iran's nuclear ambition and Hu Jintao said China will work with the United States on sanctions, reported Businessweek. The two also discussed the value of the Chinese currency, with Hu agreeing it is important China move toward a “more market-oriented exchange rate.”

Jeff Bader, National Security Council senior director for Asia spoke with reporters after the meeting on the sidelines of the two-day summit in Washington. Businessweek reported that Bader said currency revaluing was discussed, but he did not go into detail. The United States Congress is pressuring Obama about Chinese currency. Members believe China is manipulating its currency to keep it artificially low, making Chinese goods cheaper and hurting U.S. exports. The yuan’s value against the dollar has changed little over the last two years.

Stable trade relations are in the interests of both countries, said Chinese Foreign Ministry spokesman Ma Zhaoxu at a separate briefing. He called the discussion between Hu and Obama constructive and said the United States, through talks “on equal footing” should resolve trade frictions.

"The two presidents agreed the two delegations should work together on sanctions," Jeff Bader said in a briefing, reported the New York Times. According to Bader, Obama made clear the “sense of urgency” to deal with nuclear development in Iran, and Hu Jintao said China will work with the United States on sanctions. “The Chinese are very clear they share our concern about the Iranian nuclear program,” Bader said, reported Businessweek.

According to Bader, Obama emphasized that Iran “must meet its international nuclear nonproliferation obligations,” Both presidents said they will have their delegations work on sanctions with the United Nations Security Council.

“The resolution will make clear to Iran the cost of pursuing a nuclear program that violates Iran’s obligations and responsibilities,” Bader said, according to Businessweek. “The discussion was a sign of international unity on Iran. The Chinese are actively at the table.”

Bader said the two leaders’ talks on nuclear nonproliferation and economic recovery were constructive and positive. They agreed action is needed on these issues.