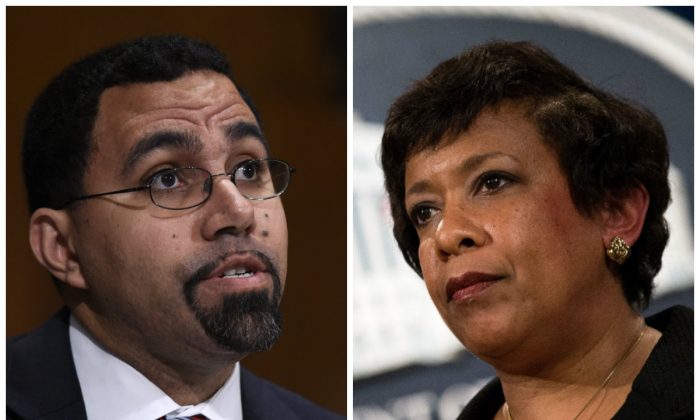 The Justice and Education Departments issued a joint guidance for schools that requires them to allow students access to bathrooms, locker rooms, and dorm rooms based on the gender they identify with.

The guidance, published May 13, comes days after North Carolina Governor Pat McCrory and Attorney General Loretta Lynch sued each other over the so-called “bathroom law.”

North Carolina state law bans people from using bathrooms and changing rooms at public agencies, including schools, that don’t correspond to the sex stated on their birth certificate. Changing sex on a birth certificate usually requires a sex-change surgical procedure.

The administration says the law violates Title VII of the Civil Rights Act of 1964, Title IX of the Education Amendments of 1972, and the Violence Against Women Act of 1994.

Both say courts have sided with them in the past.

The new guidance maintains that Title IX of the Education Amendments of 1972 includes gender identity under the protected class of sex. Therefore it requires that schools:

On the other hand it allows, but does not require, schools to:

The schools and colleges that don’t follow the guidance face the risk of losing federal funding.

The administration said it won’t withhold federal funding for North Carolina while the “bathroom law” issue is being handled by the court system.