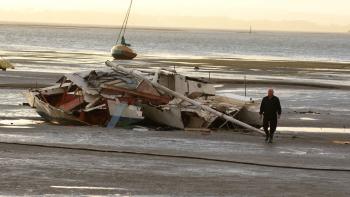 Damage is surveyed after recent storms throughout NZ caused chaos on land and at sea. (Charlotte Cuthbertson/The Epoch Times)
US

By Margo Macvicar
Print
Thunderstorms, heavy rain and gale-force winds have caused devastation in New Zealand for the past two weeks and clean-up operations have been hampered by continuing atrocious weather conditions.

What started off as a gale force warning on July 23 escalated into ongoing storms, and three "weather bombs" causing four deaths and contributed to more road fatalities.

Many people were forced to evacuate their homes as the continuous rain caused land slips, disturbing the foundations of houses in many areas, and causing street closures in the capital city Wellington.

Roads and railway lines have been damaged throughout the country and many people are without power after electricity wires were damaged.

In Nelson, Paul Thomas narrowly missed death when a pine tree fell over his car as he drove underneath. The incident was caught on amateur video and the anticipation of the close call could be heard in the voices of the onlookers. It has already had many hits on YouTube.

“So further surface flooding and slips are likely, and rivers and streams will swell quickly."

A state of emergency remains in force in some districts and there are severe weather warnings in six land areas and 18 marine areas.

Insurance companies have estimated the damage to be upward of $50 million in payout claims.