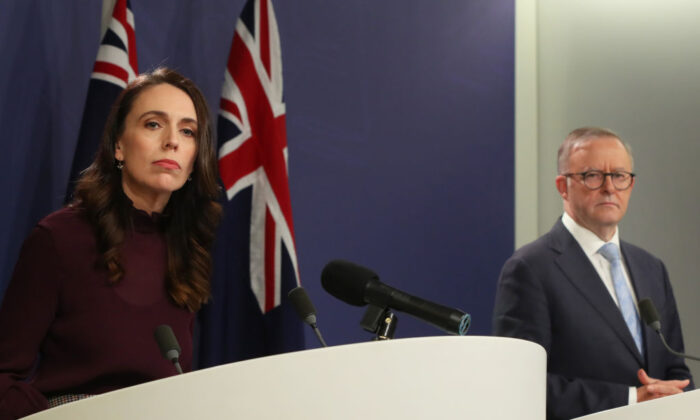 New Zealand (NZ) Prime Minister Jacinda Ardern will make her second official visit to Australia in less than a month as she brings a trade mission of over 30 New Zealand businesses to Melbourne and Sydney this week as part of the NZ government’s reconnection strategy to support export growth and the return of tourists post-COVID-19 lockdowns.

“This trade mission is one of many steps this government is taking to reconnect New Zealand with the world while actively strengthening partnerships between government, business, and industry,” Jacinda Ardern said in a media announcement of the trip on July 4.

“The 32 New Zealand business leaders joining this trade mission, range from some of our largest exporters to small innovative companies who are relatively early in their export journey, demonstrating the importance of our trading relationship with Australia.”

Australia is NZ’s second-largest trading partner, and two-way trade in 2021 was worth over NZ$22 billion (US$13.6 billion).

A key focus for the trip will also be the tourism industry, with Ardern meeting with industry leaders from both countries in Sydney.

The pandemic border controls implemented by the Ardern government have meant the NZ tourist industry was hit hard by the pandemic with Tourism Industry Aotearoa (TIA) saying the industry lost an estimated 120,000 employees during the pandemic.

New Zealand Small Business and Tourism Minister Stuart Nash, who is also travelling with the Kiwi PM, said Australia is the country’s largest source of visitors, generating over $A2.45 billion (US$1.66 billion) to New Zealand’s economy.

“Australia is also New Zealand’s largest source of visitors with over 1.55 million visiting our shores in 2019 and contributing over $2.7 billion to the economy. With our borders now open and the removal of pre-departure testing, we’ve created significant opportunities for tourism recovery as we welcome back our Australian friends,” Nash said.

Leaders to Meet for the First Leadership Forum Since 2019

While in Sydney, Ardern will also meet with Australian Prime Minister Anthony Albanese for the annual meeting of the Australia-New Zealand Leadership Forum (ANZLF).

The Forum is being held for the first time since 2019 and allows industry leaders from both countries to discuss issues including economic ties and recovery, regional security, migration settings, and climate change.

“The Forum is an important opportunity to engage with government and business leaders from both sides of the Tasman on our shared economic recovery in an increasingly uncertain world,” Ardern said.

“On Friday, Prime Minister Albanese and I will hold our annual Leaders’ Meeting, and will be an opportunity to further exchange views on a wide range of global issues such as the war in Ukraine and climate change, as well as discuss important regional issues ahead of the Pacific Island Forum.

“We have invited key Ministers to join our meeting, enabling a richer discussion on issues of particular interest. Such conversations are more important than ever to ensure that we face this period of transition and renewal together, as allies and family.”

Ardern will be travelling with seven of her ministry including her Deputy Prime Minister Grant Robertson, Minister for Trade and Export Damien O’Connor, Minister for Tourism Stuart Nash, Immigration Minister Michael Wood, and the Minister for Climate Change James Shaw.

Albanese said he was delighted to welcome the NZ prime minister back after her recent visit in June.

“This will be our second bilateral meeting in the past month, which is a reflection of the closeness of our trans-Tasman relationship. It truly is one of family,” he said. “I look forward to discussing ways to strengthen Australia’s bond with one of our closest neighbours.”

The two prime ministers will also address the Trans-Tasman Innovation and Growth Awards event and Ardern will give a policy speech at the Lowy Institute.