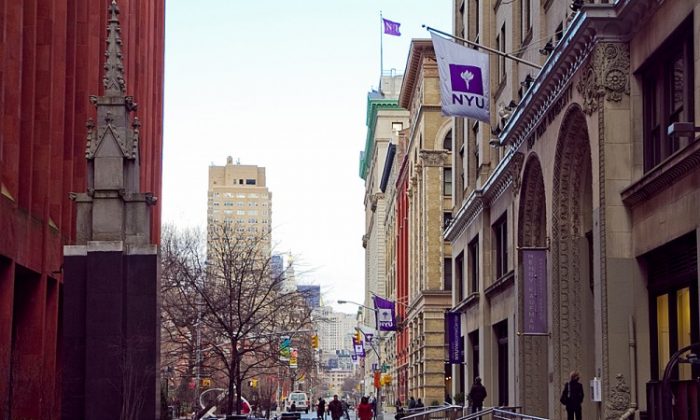 A view of the NYU campus on the southeast side of Washington Square park at the Henry Kaufman Management Center building. (Benjamin Chasteen/The Epoch Times)
US

NYU Expansion Rejected By Community Board 2

NEW YORK—Voting unanimously, Community Board 2 rejected New York University’s plan to expand its campus in Greenwich Village on Thursday night, in the first of four votes on the proposal.

It has met with fierce opposition by community members and organizations. Hundreds of people attended the first community board meeting about the proposal. After listening to NYU and its plan designers explain proposed zoning changes, dozens of people, including NYU faculty, stood in line and derided the plan in two-minute voicings.

“The university is looking to add a two-and-a-half-million-square-foot space to the blocks south of Washington Square, which is the equivalent to the empire state building,” said Andrew Berman, executive director of Greenwich Village Society for Historic Preservation, on Thursday. “This was all once publicly owned land that was given to NYU with certain conditions attached to it, and now the university is seeking to throw all of those conditions out the window.”

Lynn Browne, senior vice president for University Relations and Public Affairs for NYU, said at a recent real estate event that the NYU 2031 expansion plan gives “us … our communities and neighbors a blueprint” for the next several decades. Some aspects, though, especially the Greenwich Village portion, “are [still] controversial.”

Browne said the university has targeted other areas for future growth in the plan, such as downtown Brooklyn and between 23rd Street and 42nd Street on the East Side.

The seven-month Uniform Land Use Review, triggered by multiple requests made by the university—such as having the city sell land to them and amending the zoning map—continues with an upcoming advisory review issued by Manhattan Borough President Scott Stringer within 30 days. After that, the City Planning Commission and, subsequently, the City Council, will review the plan. A majority City Council vote would approve the proposal, though the mayor could veto an approval within 5 days. In that case, the City Council could overturn the mayor’s veto with a two-thirds vote.